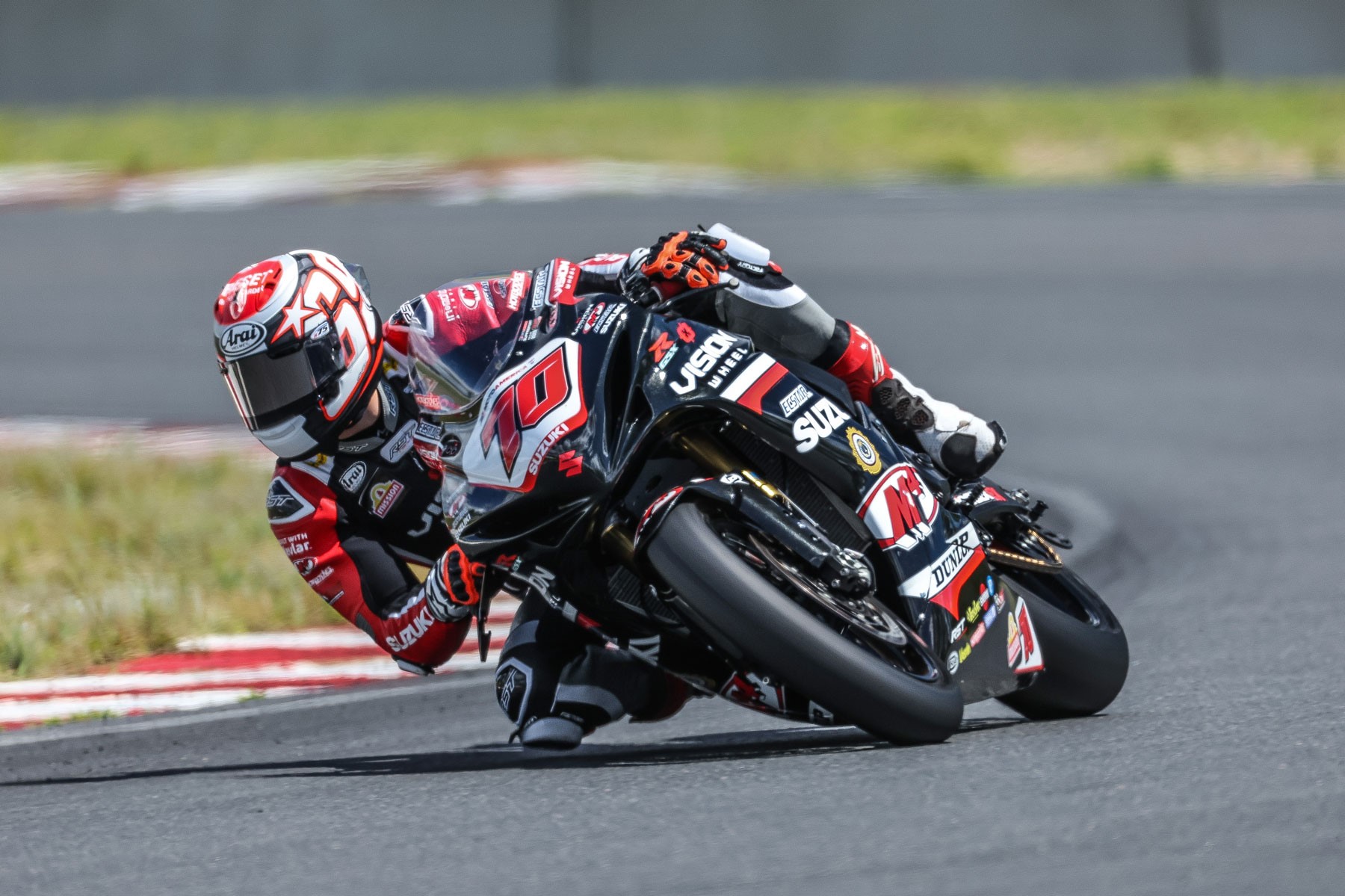 Tyler Scott (70) continuing his progression in the new generation Supersport class on his GSX-R750.

Rookie phenom Scott rocketed the next-generation GSX-R750 out to the holeshot, was dropped to third, reclaimed first, and then was pushed down to fourth, all in the course of a hectic opening lap.

Meanwhile, Ventura, in his second weekend riding in place of the injured Sam Lochoff, made his way up into fifth by lap five despite having to swap out his GSX-R750 for the team’s backup GSX-R600 following a qualifying shunt. 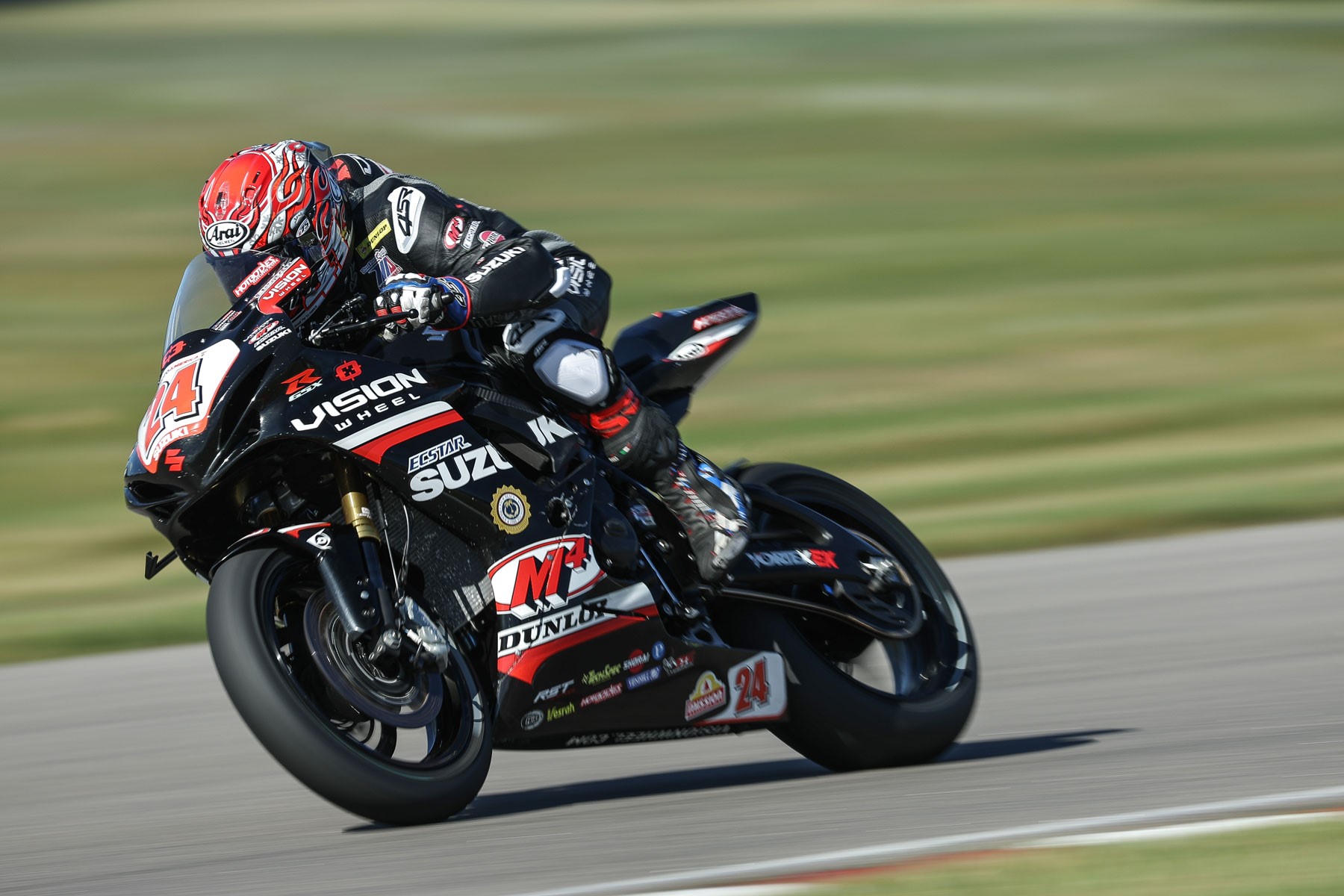 After a tough qualifying, Cory Ventura (24) was still able to place in the top-five in Race 1 at Brainerd.

The Californian kept Scott honest from that point forward, as the two locked down fourth and fifth to the checkered flag despite some determined efforts from their adversaries to displace them.

“I captured fourth and overall, it was an okay race for us,” said Scott. “I feel a little bummed out because I lost points in the championship, but it was a decent result on a day when I feel my riding wasn’t the best. The bike worked well, there are just a couple of areas where I think I can do better and we get another shot at it tomorrow. I’m going to collect myself and hopefully, we will do what we are capable of on Sunday.”

A hard-fought top ten finish for Liam Grant (90) in Race 1 and is looking to make improvements in Race 2.

The team’s third MotoAmerica Supersport pilot, Liam Grant, came home in tenth to give the squad three riders among the six Suzuki GSX-R motorcycles to finish in the top ten. Another example of the new generation Suzuki GSX-R750’s continued rock-steady performance in the hyper-competitive Supersport championship. Saturday’s race had 60% of the top ten finishers on Suzuki GSX-R race bikes. 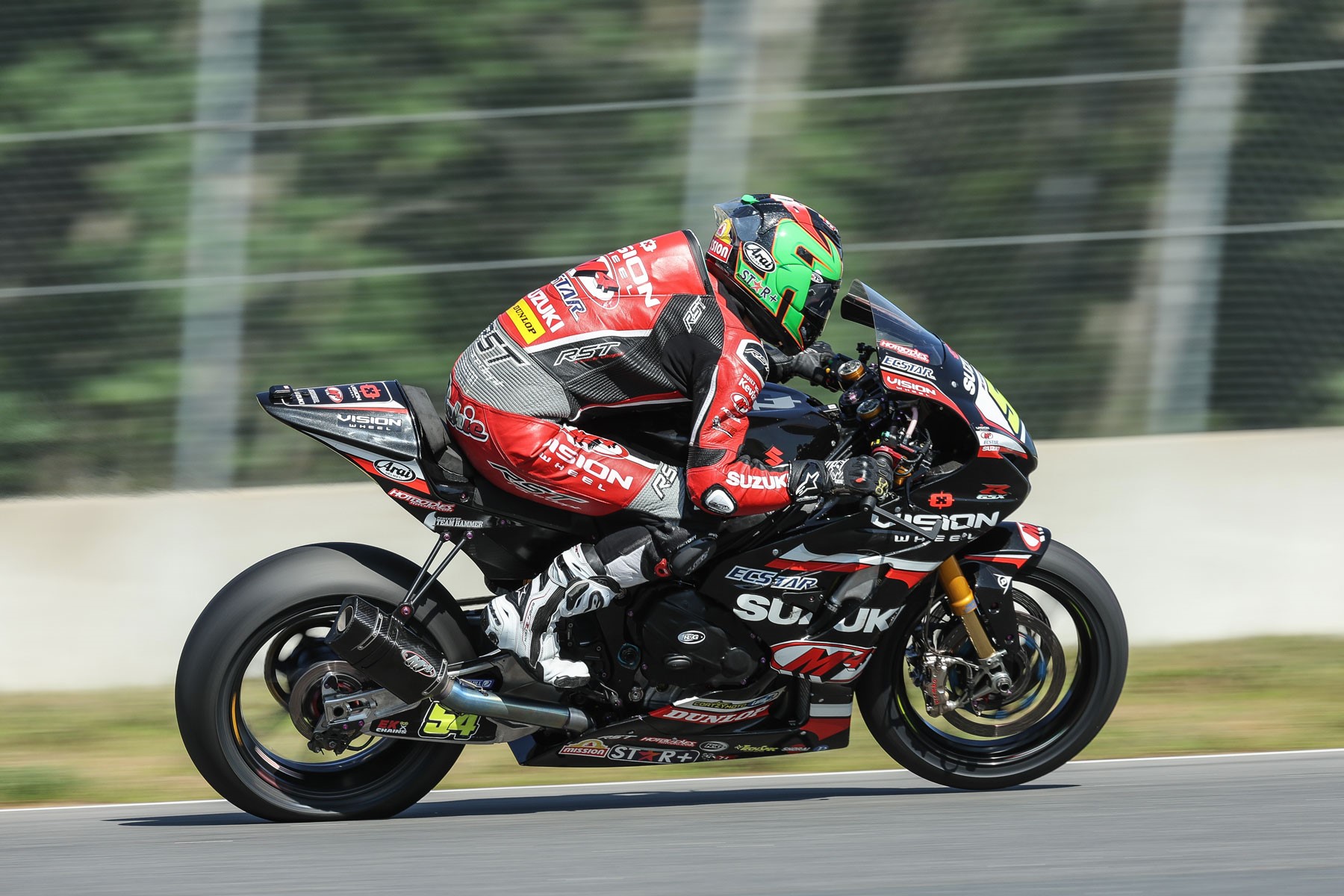 Richie Escalante (54) unfortunately could not participate in Race 1 after a hard fall in qualifying.

Unfortunately, Richie Escalante was unable to capitalize on his recent progress in the MotoAmerica Superbike action on Saturday. The Superbike-class rookie demonstrated a continuation of his impressive speed from the previous round at BIR, earning a spot on the second row. However, he was absent from the grid due to an ankle injury suffered in a hard fall during qualifying.

That left the still mending Jake Lewis as the team’s sole representative in the premier class aboard the #85 Vision Wheel M4 ECSTAR Suzuki GSX-R1000R. The Kentuckian, who qualified 12th, fought his way up inside the top ten early. Lewis registered a steady ride to ultimately collect a ninth-place result in his first race back from injury. 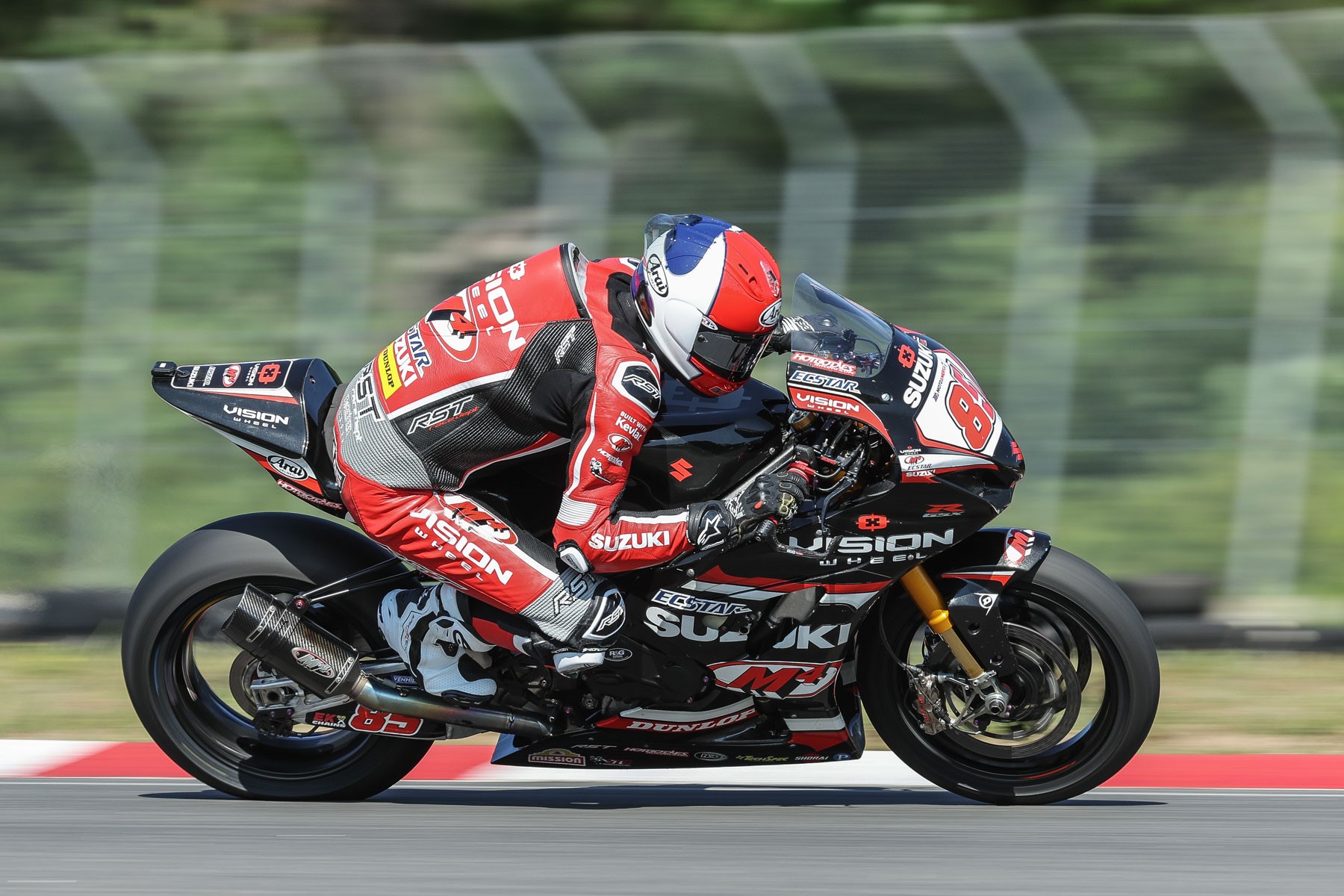 Still on the mend, Jake Lewis (85) fought through the pain for a top ten finish in Race 1.

“Today was the first race back for me and it was nice to be back, obviously,” said Lewis. “Definitely I wanted more than ninth place. It’s been a tough weekend with some pain from my thumb. Despite that, I feel like I should be fighting in the top five. We’ll make some changes for tomorrow and strive to be closer to the front.”

Team Hammer will be back in action on Sunday in search of even stronger results as the Brainerd International Raceway MotoAmerica race weekend concludes.

ABOUT VISION WHEEL
Founded in 1976, Vision Wheel is one of the nation’s leading providers of custom wheels for cars and trucks, and one of the first manufacturers of custom wheels and tires for ATVs, UTVs, and golf carts. Vision Wheel looks beyond the current trends and to the future in developing, manufacturing, and distributing its wheels. Vision’s lines of street, race, off-road, American Muscle, and Milanni wheels are distributed nationally and internationally through a trusted network of distributors. Vision Wheel also produces the Vision It AR app to allow users to see how their wheel of choice will look on their vehicle before purchase and installation. For more information on Vision Wheel, visit www.visionwheel.com.