The GSX-S1000 launched in 2015 as a new model developed to bring the fun of sport riding to riders on the street. At its heart was a street-tuned version of the powerful long-stroke engine that carried the GSX-R1000 to countless superbike and endurance race victories. This engine was skillfully paired with a compact and lightweight chassis, state-of-the-art running gear and a comfortable upright riding position. Just as the GSX-R1000 was built to “own the racetrack”, the GSX-S1000 was created to “own the street”. 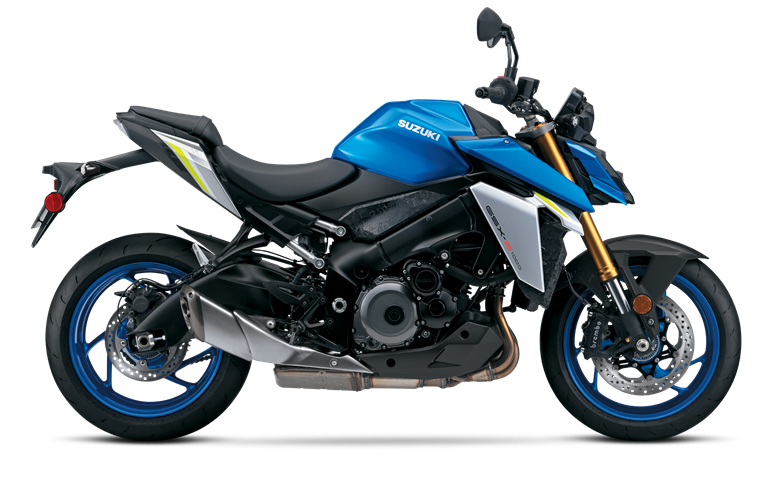 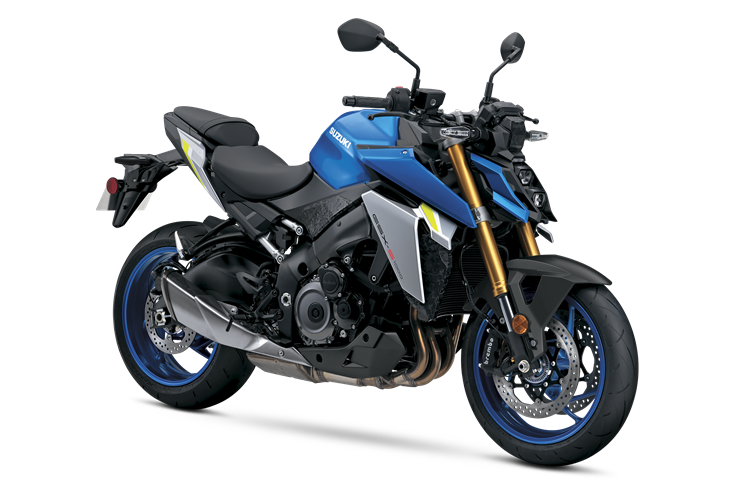 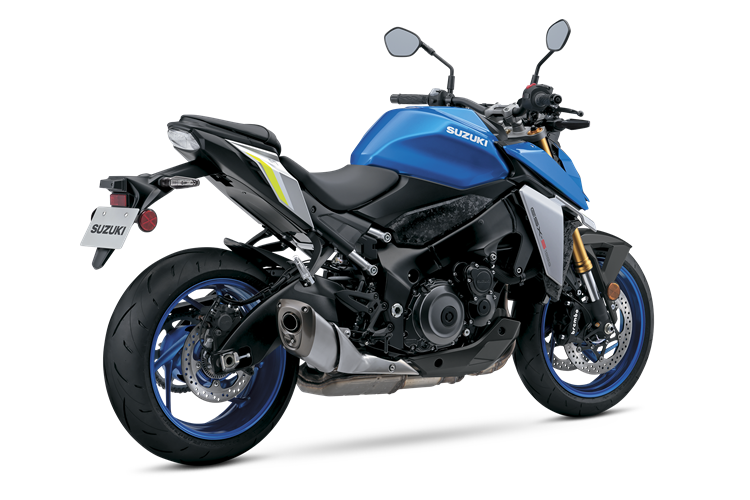 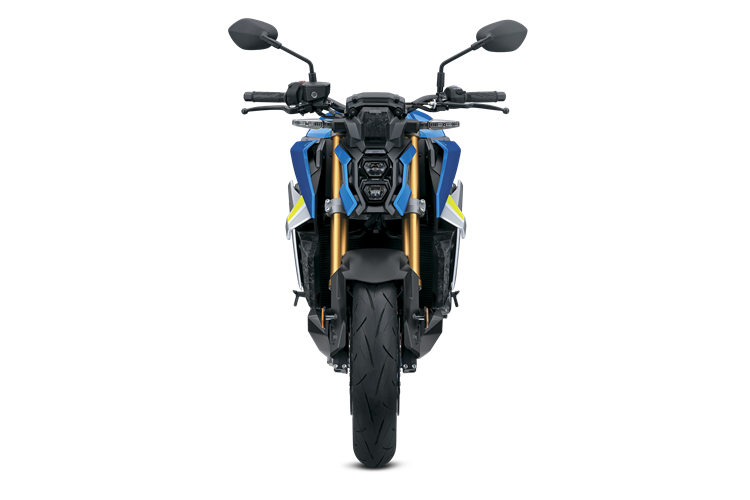 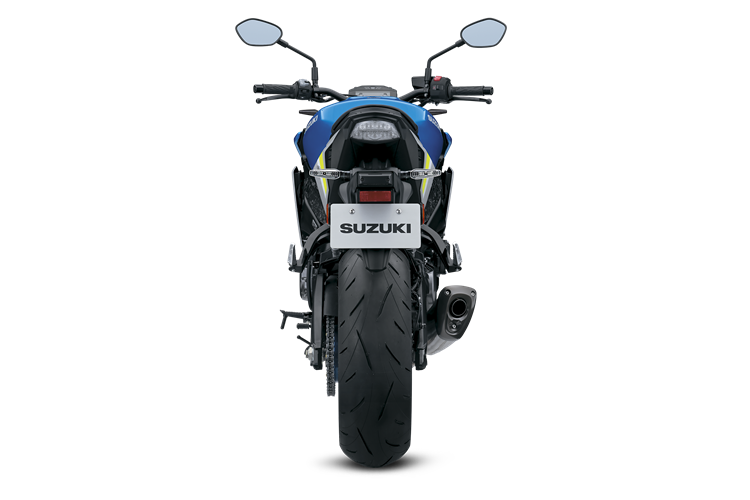 The latest version of the Suzuki Clutch Assist System (SCAS) smooths shifting and engine braking, and give your clutch hand a rest with the new Bi-directional Quick Shift system.

The GSX-S1000’s long-stroke GSX-R engine has been refined to produce a broad, smooth torque curve through the full rev-range with increased peak horsepower.

New camshaft profiles decrease lift and valve overlap not only to improve emissions, but balance the engine’s performance and drivability, enhancing rider control.

The cam chain tensioner and tension adjuster are updated to reduce friction and improve durability.

Suzuki’s legendary Twin Swirl Combustion Chamber (TSCC) design is machined into the cylinder head that, with the flat-top pistons, achieves an optimal 12.2:1 compression ratio that helps deliver a broad spread of power throughout the entire rev range.

Aluminum pistons, engineered with use of Finite Element Method (FEM) analysis, are cast with optimal rigidity and weight.

The engine finish is revised to present an even stronger image of quality while the design of the engine covers (clutch, stator, and drive sprocket) are updated with a new shape and finish.

New electronic throttle bodies are used on the GSX-S1000, so engine response is smooth and controlled, especially when the rider is applying the throttle to accelerate out of a corner.

The air cleaner has a new internal structure that contributes to the GSX-S1000’s increased engine performance while maintaining the exciting intake sound that the GSX-S1000 is renowned for.

Retaining the under-chassis design, sharp looks and exciting note of the prior generation’s system, the GSX-S1000’s new stainless steel, 4-2-1 exhaust system is completely redesigned and tuned.

A refined Suzuki Exhaust Tuning (SET) valve manages flow from the mid-chamber into the sculpted muffler that has a pleasing appearance that’s not common to under-chassis exhausts while creating an exciting, distinctive sound.

Additional heat is removed from the engine via the use of a lightweight and compact liquid-cooled oil cooler (like those used on certain GSX-R models).

The precise shift linkage helps the rider easily and quickly select the best gear for the riding conditions.

The latest version of the Suzuki Clutch Assist System (SCAS) clutch is fitted to the GSX-S1000. More than ever before, the SCAS clutch increases plate pressure under acceleration, yet acts as a slipper clutch to smooth the engine response during engine braking and corner entry.

Suzuki’s proven, twin-spar aluminum frame helps to ensure nimble handling and great road holding ability. The main spars are straight from the steering head to the swingarm pivot, which is ideal for achieving high rigidity and light weight.

The sturdy aluminum-alloy swingarm comes straight from the GSX-R1000. It is ruggedly braced and helps to ensure great road holding ability, together with superbike looks.

Connected to the swingarm is a link-type rear suspension, with a single shock absorber that features spring preload, and is seven-way adjustable with rebound damping force adjustment.

Dunlop’s new Roadsport 2 radial tires (120/70ZR17 at the front and a new, wider sized 190/50ZR17 at the rear) are custom-engineered to perform optimally on the GSX-S1000, providing great grip in dry or wet conditions, faster warm-up, and long tread life.

These wheels and new tires work in harmony with revised front and rear suspension settings to help realize the great grip, stability and nimble handling demanded for sporty performance, while also contributing to a comfortable ride.

The front brakes are complemented by a 240mm rear disc brake with a Nissin single-piston caliper to help ensure controlled stops.

Both the front and rear brakes can be modulated by a new, compact Anti-lock Brake System (ABS)** controller to match stopping force to the available traction.

The new GSX-S1000 features an upright riding position for greater comfort and control. This reasonable sport riding position is the result of a carefully crafted relationship between the handlebar, footrests, and seat.

The black finish on the shifter, rear brake, and both hand levers matches the performance nature of the motorcycle.

The GSX-S1000’s new fuel tank increases capacity up to 19 L (5.0 US Gal.) to reduce the frequency of gas stops while commuting or on long rides.

The new front seat is designed for comfortable sport riding that includes a foam shape change to provide great support at the back of the seat while offering excellent freedom of movement for the rider.

The body work displays a sense of athleticism and muscular strength.

The styling is meant to convey an aggressive attitude.

A new, custom-designed ignition key sporting the GSX-S logo on the hilt aims to instill pride of ownership.

Suzuki’s Easy Start System requires just a simple touch of the starter button to fire up the engine (without pulling the clutch lever if the transmission is in neutral).

The GSX-S1000’s Computer Area Network (CAN) style wire harness functions as an interconnected information network, rather than using a more complex and slower conventional wiring harness.

A new 32-bit ECM provides state-of-the-art engine management that contributes to the operation and optimization of the GSX-S1000’s electrical and S.I.R.S. components.

Using a high-visibility LCD display, the GSX-S1000’s brightness-adjustable instrument cluster, packs a wide range of useful information into a compact module positioned at the center of the large-diameter handlebars.

The instrument’s exclusive graphics and blue backlighting create a high-quality appearance that will instill pride of ownership, and the fresh, new information format readouts are easy for the rider to recognize.

The LCD readouts include:

The GSX-S1000 is equipped with Suzuki innovative multifunction handlebar switches that are laid out to maximize operating ease and efficiency.

A perfect complement to the GSX-S1000’s razor-sharp styling, the new compact vertically stacked LED headlight assembly is trim, tight with the front fork.

Supplied by Koito®, the independent, polygon-shaped, high- and low-beam headlights feature a new Mono-focus LED technology that shines light directly through a convex lens to brightly illuminate the road.

The dual hexagonal shaped LED headlights are topped by a single LED position light that creates a clean new face that’s unlike any other motorcycle, making the GSX-S1000 clearly visible to pedestrians and other traffic. It’s a light, nimble look that emphasizes the new GSX-S1000’s aggressive stance and eagerness to perform.

The Bi-directional Quick Shift System (QS) allows the rider to shift up or down quickly and easily, without operating the clutch or throttle.

The Suzuki Easy Start System lets the rider start the motorcycle with a simple press of the starter button. There is no need to pull in the clutch lever when the transmission is in neutral, and the starter motor automatically disengages, the instant the engine fires up.

The Low RPM Assist System seamlessly increases engine speed to smooth the power delivery when launching from a standing start or riding at low speeds, which helps ensure better control and operation in stop-and-go traffic. The system also minimizes the possibility of the rider stalling the motorcycle during take-off.

A variety of Genuine Suzuki Accessories are available, such as a solo seat cowl, meter visor (acts as a sport screen), billet clutch and brake levers, fuel tank and engine cover protectors, clip-on tank bags, plus a selection of GSX-S logo apparel.