A proud member of the GSX-R family of ultra-high performance motorcycles, the 2021 GSX-R1000’s versatile engine provides class-leading power that is delivered smoothly and controllably across a broad rpm range.... 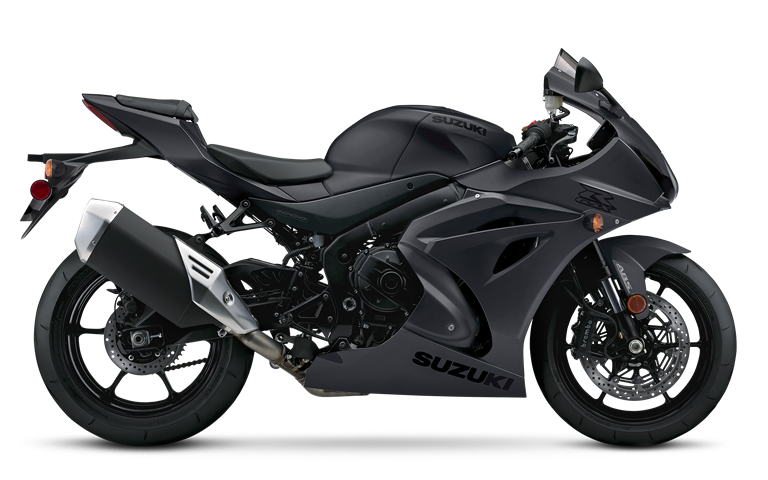 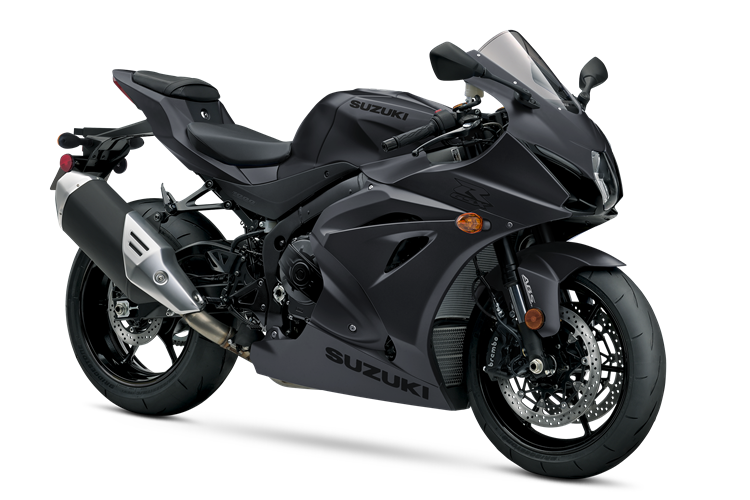 DOHC, inline-four engine produces great top-end power with a strong low- to mid-range pull thanks to the exclusive Suzuki Variable Valve Timing (VVT) system and the highly efficient 4-2-1 exhaust with a revised muffler and heat shield.

Twin-spar aluminum frame is lighter and more compact than the prior-generation GSX-R1000 for nimble handling with a high level of grip when cornering.

The 2021 GSX-R1000 is available in a Metallic Matte Black No. 2 color scheme that features complementary black graphics and wheels.

The short-stroke engine has a 76.0mm bore versus a 55.1mm stroke yet is narrower than the prior-generation GSX-R1000 thanks to effective design.

Aluminum pistons, 76.0mm in diameter, were engineered with use of Finite Element Method (FEM) analysis and are cast for optimal rigidity and weight.

The EFI system uses Suzuki’s Ride-by-Wire Electronic Throttle Bodies, where the throttle valves are controlled by a servo motor for fast response to rider throttle grip input while delivering precise and smooth power.

Complementing the four primary fuel injectors in the throttle bodies are four Suzuki Top Feed Injectors (S-TFI) that spray fuel from the top of the airbox directly into the intake funnels. This results in higher peak power, more efficient combustion, and a higher level of fueling control.

To increase top-end power without losing lower rpm performance, the airbox is equipped with stacked air intake funnels for the two outer cylinders. This simple design allows good air flow at all intake speeds without requiring a mechanism that adds weight or complexity.

A pair of Suzuki Ram Air Direct (SRAD) intake ducts are used to exponentially increase the volumetric flow of air amount coming in the airbox as road speed increases.

The 4-2-1 exhaust system is designed to help the engine deliver a wide range of performance with an exciting rush up to redline. The black finish titanium muffler, with brushed stainless steel heat shield, is tucked up high for good clearance at high lean angles while creating an exciting, distinctive sound.

SET-Alpha exhaust valves in the balance tubes between the two outer and the two inner head pipes open at higher engine speeds and close at lower rpm to help the engine create high peak power without losing low- and mid-range horsepower.

The cooling system was designed using advanced analysis design so the coolant flows through the engine and radiator more efficiently. This design uses 400cc less coolant than the prior-generation GSX-R1000, but has better cooling efficiency while being more compact and lighter.

The GSX-R1000 includes the Suzuki Bi-Directional Quick Shift System which was previously available only on the GSX-R1000R model. This system allows for clutchless upshifts and downshifts when the motorcycle is used in competition.

The cassette-style, six-speed transmission lets riders precisely match the gear ratio to the riding condition. A cassette-style transmission can be easily removed from the crankcase as an assembly with the engine still in the frame, facilitating race track gear changes and simplified service.

The primary gear ratio is lower compared to the prior-generation GSX-R1000 for stronger acceleration.

The shift linkage can be easily set up for reverse-pattern, GP-style shifting (even with the quick-shifter in use).

A programmable shift light is on the main panel to provide a visual alert to the rider to shift when a certain engine rpm is reached.

The GSX-R1000 is equipped with the Suzuki Clutch Assist System (SCAS) multi-plate, wet clutch. SCAS works like a slipper clutch during downshifts while increasing pressure on the plates during acceleration. This smooths engine braking and lightens the clutch lever pull.

To reduce moving mass, a 525-size drive chain is used with a 45/17 final sprocket ratio that complement the large rear tire dimensions.

Using MotoGP knowledge, Suzuki has fitted an Inertial Measurement Unit (IMU) to the GSX-R1000. The IMU provides six-direction, three-axis motion, and position information to the ECM so instantaneous adjustments can be made electronically to the engine and chassis components that influence performance.

The LCD multifunction instrument panel was inspired by the GSX-RR MotoGP dash. This panel is laid out so the rider can easily see the tachometer bar, speedometer digits, and other essential operational information. This effective display is critical, as it is the rider’s interface to the GSX-R1000's advanced electronics.

The Ride-by-Wire electronic throttle bodies are precisely opened by the ECM to match the throttle grip rotation of the rider’s hand and the refinement from the IMU-influenced electronics. The result is a strong, seamless engine power delivery from idle to redline.

Exclusive to Suzuki, the Motion Track Anti-lock Brake System (ABS)** brings additional control to anti-lock braking. Like a conventional ABS system, the Motion Track Brake System provides the appropriate amount of braking force for the available traction. When the IMU detects the rear wheel lifting up from extreme braking forces, the ABS control module will adjust the front brake pressure to reduce the rear wheel lift.

The Suzuki Easy Start System simplifies startup for the GSX-R1000 rider as the ECM automatically cranks the engine for 1.5 seconds (or until it starts) with a momentary press of the starter button. There is no need to pull in the clutch lever if the transmission is in neutral. Once started, the ECM will control the electronic throttle bodies to maintain a consistent engine idle speed, whether the engine is cold or warm.

The innovative Suzuki Low RPM Assist System smooths takeoffs and reduces the chance of the rider stalling the motorcycle. If necessary, the ECM raises engine rpm slightly for a smoother start when the clutch is released, so it’s easier to ride away from a stop or navigate at very low speeds in traffic.

Using lessons learning from Suzuki MotoGP chassis development, the engine angle of the GSX-R1000 was rotated backward six degrees. This had the joint effect of reducing the distance of the fork to the center of the chassis by 20 mm and increasing the swingarm length by 40 mm. This increases chassis stability and improves aerodynamics.

The aluminum twin-spar-style frame was designed using FEM analysis technology to place strength in the proper places as the frame is 10 percent lighter than the prior-generation GSX-R1000. The spars of the frame are set 20 mm closer to help improve aerodynamics and looks and to bring more comfort to the rider.

The aluminum Superbike-braced swingarm has equalized bracing to the main beams to provide balanced support and movement to the shock absorber, improving racetrack handling while conveying a consistent suspension feel to the rider.

Racetrack-developed links connect the single Showa Remote Reservoir Shock Absorber to the braced swingarm. With spring preload, rebound damping, plus high- and low-speed compression damping force adjustment the rider can tune the motorcycle to respond to riding style and weight.

Superb suspension action is delivered by the fully adjustable Showa Big Piston Front Fork (BPF), which is renowned for damping force control that maintains front tire contact with the surface so the rider gets good sensory feedback while riding at a variety of speeds.

Brembo T-drive Brake Rotors feature two methods of attaching the 320mm floating disc to the carrier. There are five conventional floating rotor spools that maintain the rotor’s relationship to the caliper and five new-design T-drive fasteners. This combed attachment technique allows the rotor to absorb more energy, so a high degree of braking force is available to a GSX-R1000 rider.

The front brakes are complemented by a 240mm rear disc brake with a Nissin single-piston caliper to help make sure you can have controlled stops.

The wheel rims have pinstripes punctuated by “R” logos that highlight the bike’s identity.

The reasonable sport riding position is created by a carefully crafted relationship between the clip-ons, footrests, and seat. Compared to the prior-generation GSX-R, the top of the fuel tank is lowered 21mm lower to make it easier for the rider to tuck in on a racetrack straightaway.

The seat height is an appropriate 825mm (32.48 inches) and contributes to the good rider interface that aids in guiding the motorcycle on the road or racetrack.

The passenger seat can be removed and exchanged with an optional color-matched solo tail cowl.

Controller Area Network wire harness (CAN Bus) allows for fast and precise communications between all of the GSX-R1000’s electronic systems. With a CAN Bus system, riders will experience swift and trouble-free electronic system operation while the size and complexity of the wiring are simplified.

The LCD multifunction instrument panel has an adjustable intensity, white color backlight for great nighttime visibility and is flanked by LED indicators that include the turn signals, high beam, traction control, and shift light, plus coolant temperature and oil pressure alerts.

The LED headlight is lightweight, bright, and distinctive. This low-electric draw light has a narrow, stacked shape to allow the SRAD ducts at the nose of the fairing access to the high-pressure air created at higher speeds.

The LED combination tail and brake light assembly has a very low electrical draw, and the vertically stacked shape permits the tail section to be narrow for better air flow at the back of the motorcycle. The license plate is also illuminated by an LED light.

The turn signals are lightweight and use incandescent bulbs with amber lenses, so the motorcycle’s turn indication is highly visible to other traffic.

The polyfunctional "Start/Stop" switch combines the engine stop and start functions. The switch is a fine complement to the Suzuki Easy Start System fitted to the GSX-R1000.