BREA, CA – June 27, 2022 — Angelle Sampey scored a historic victory in the Pro Stock Motorcycle class at the Summit Racing Equipment NHRA Nationals in Norwalk, OH, on Sunday to claim her first win of the 2022 season and the first for her Vance & Hines/Mission Suzuki this year. 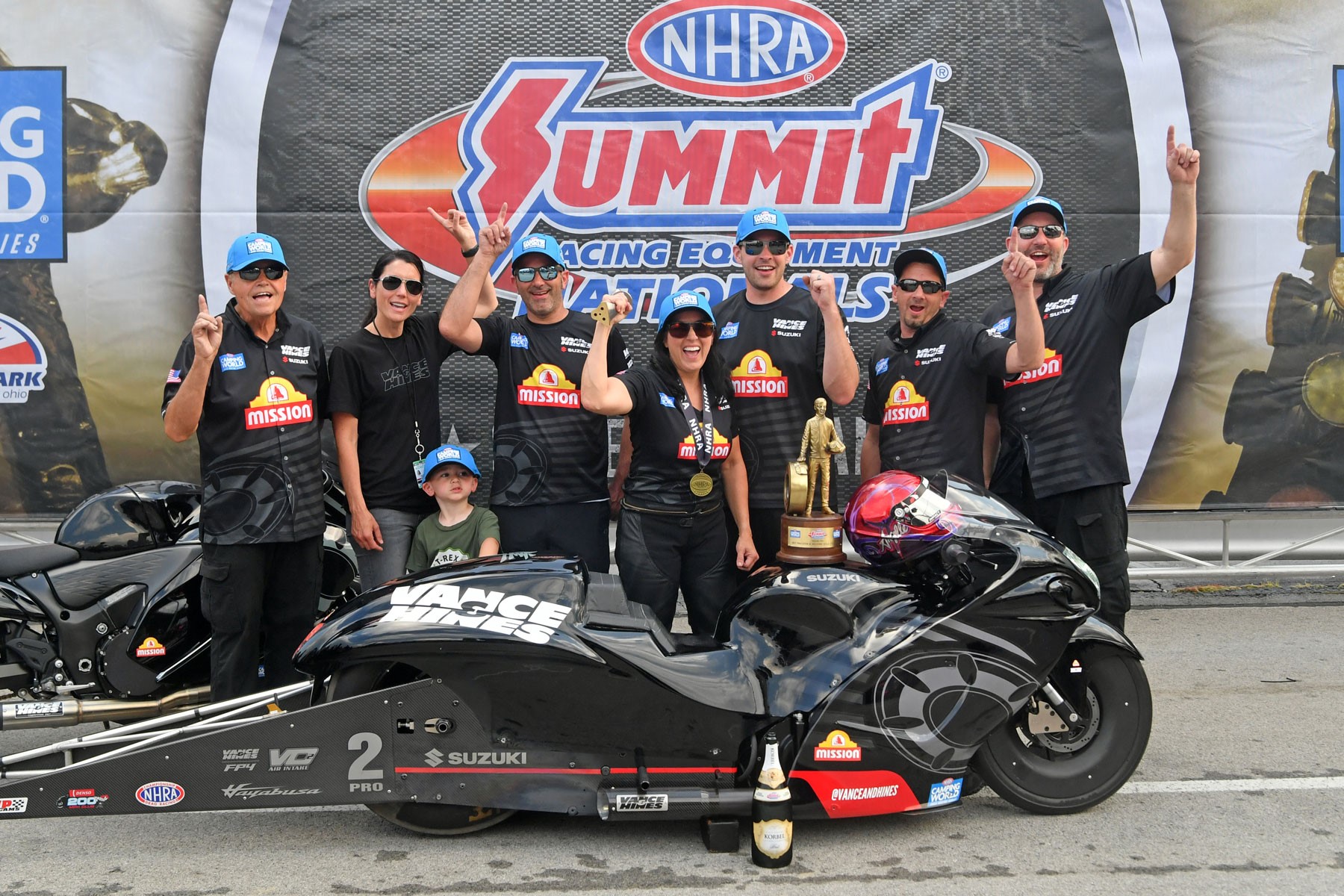 Vance & Hines/Mission Suzuki Team celebrates with Angelle Sampey (2) after the victory at the NHRA Nationals in Ohio.

After a long rain delay between the semi-finals and the final round, the three-time class champion faced off against Joey Gladstone in an all-Suzuki final in the 80th final-round appearance of her legendary career. Her Suzuki Hayabusa was first to leave the starting line and Sampey was never challenged enroute to her 46th career win, defeating Gladstone with a 6.861-second/197.13 mph pass against his 6.928-second/194.60 mph run to claim the victor’s coveted Wally trophy.

Sampey qualified second behind teammate Eddie Krawiec and advanced to the finals with wins over Ron Tornow, who fouled in the first round, and Matt Smith in round two, knocking off the defending 2021 champion with a 6.890-second/195.90 mph pass over his 6.947-second/195.53 mph run. In the semi-final round, Sampey took revenge on Jerry Savoie, to whom she suffered an emotional loss in the final round last weekend at Bristol, cruising into the finals with a 6.855-second/198.35 mph victory over his 6.995-second/183.29 mph run. 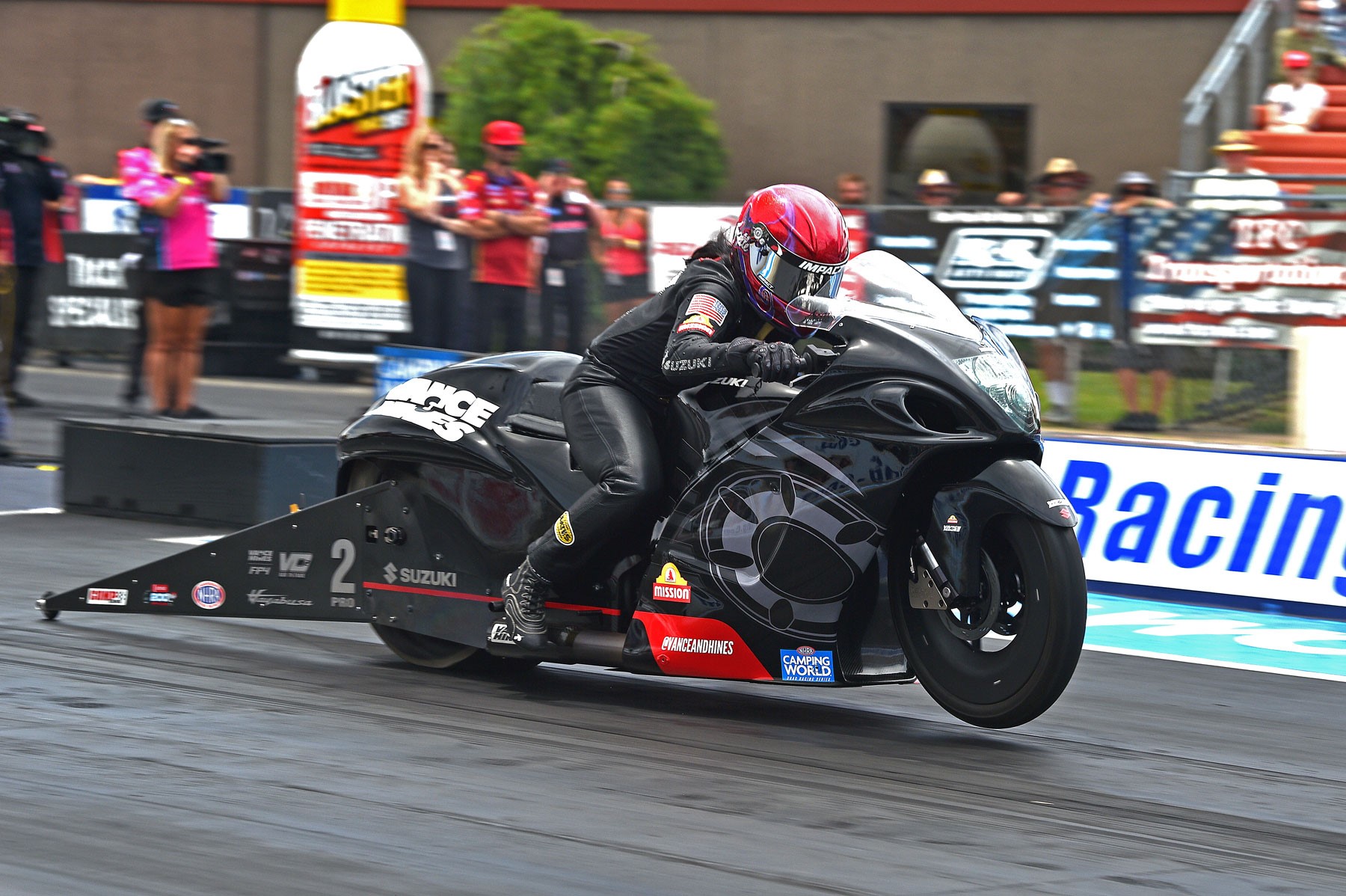 Angelle Sampey (2) launches into victory for her first of the year aboard her Vance & Hines/Mission Suzuki Hayabusa.

“I’ve got to give the team all the credit because Andrew (Hines) and all the guys, they always do what they need to do to give me a great motorcycle. When he set that axle and the wheelie bar in the third round, it went down the track like it was on a rail and it gave me all the confidence I needed for the final,” Sampey said after the emotional win. “It was a long, mentally tough day. I did a lot of digging real deep into my soul and my mind, reminding myself of what I'm capable of and trying to remember who I used to be when I first started racing. I was young. I was fearless. I didn’t think anybody could beat me, and that was the mental toughness that I needed. This weekend was the start of my journey back to finding that person I used to be when I believed in myself as much as I believed in my team and my equipment.”

Aboard his Suzuki Hayabusa, Krawiec qualified in the number one position for a milestone 50th time in his career with a 6.798-second/199.05 mph run to lead the field heading into Sunday eliminations. In the first round of eliminations, he beat Jianna Evaristo with a 6.864-second/197.74 mph pass. Facing Hector Arana, Jr. in the second round, Krawiec was second off the line and caught and passed Arana before slowing at the top end of the track and failing to advance with a 6.942-second/176.60 mph run against Arana’s 6.915-second/197.13 mph pass. 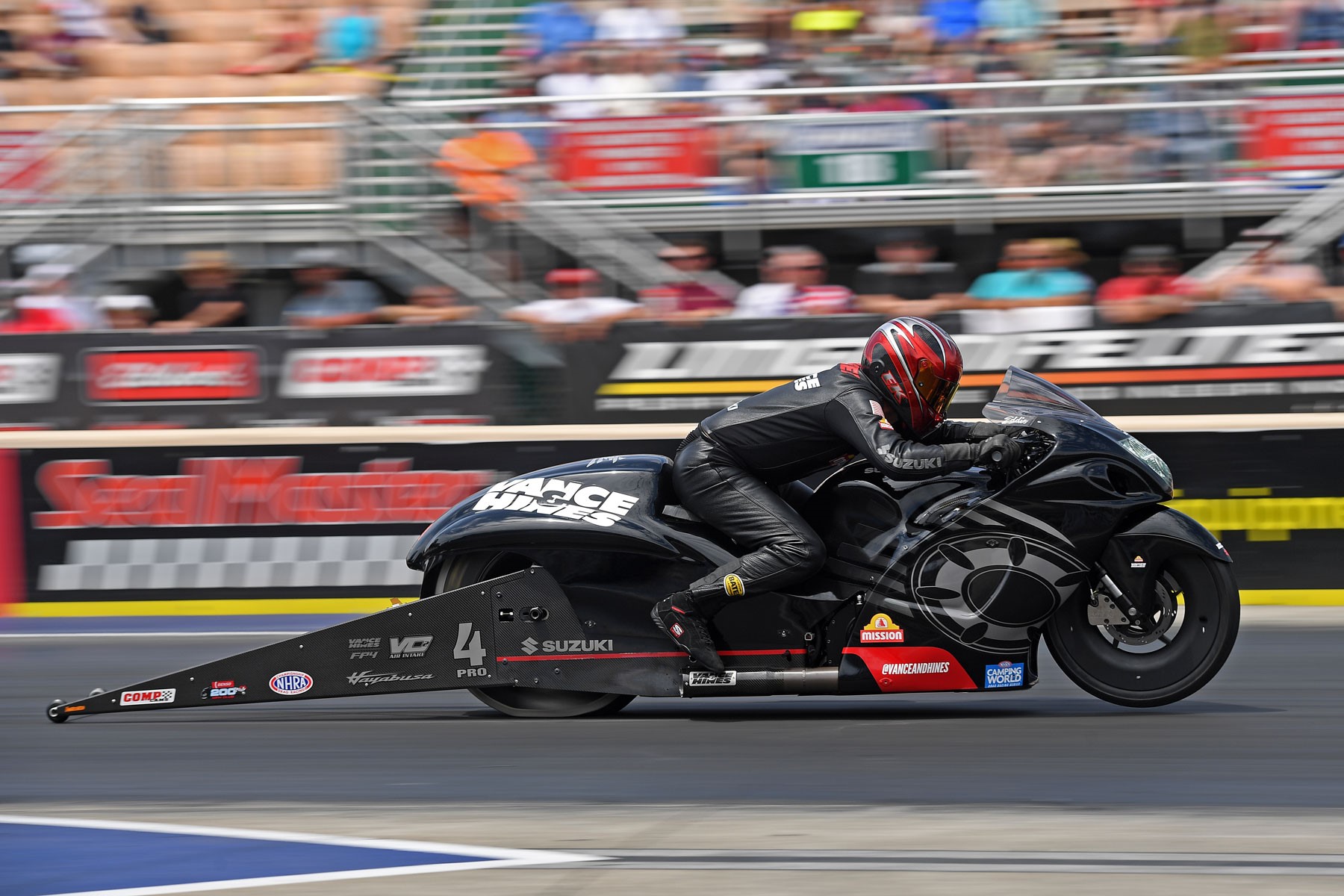 After putting his Vance & Hines/Mission Suzuki Hayabusa in the number one qualifying position, Eddie Krawiec (4) looks to carry the momentum to Colorado.

“If I had a little better luck there in the second round, I would have been in good shape, but it just didn't shift into high gear. I was way ahead and didn't shift,” Krawiec said. “The end result is not what we were looking for, but the overall results here are what we’re looking for. We finally showed that my Hayabusa has the potential to run at the front of the pack, to be as good as anybody’s. All our testing is starting to pay off. It’s a great package and I think we finally turned the corner with it. We’re in a good position heading into the middle part of the season.”

Crew Chief Andrew Hines said the team’s top performance in qualifying on Friday allowed him to test some things on Saturday that paid dividends in the elimination rounds. The race also provided confirmation of some new equipment used at Norwalk, including a fresh engine for Sampey’s motorcycle, that will set the team up for the upcoming crucial middle part of the season.

“We finally got all the win lights to turn on. It was hard to navigate this racetrack with the crosswinds today, but we made it go straight when it counted the last three rounds,” Hines said. “We showed both our Hayabusas are fast and that’s what we’ve been striving for. We knew the wins would come because our Suzukis have been fast and shown flashes of brilliance, but we just had to wrap it all up in one day. To have two motorcycles qualify one and two, and show that they’re consistently at the top of the pack every run is pretty outstanding. We always strive to have the two best motorcycles in the category. It’s great to have Suzuki on board and get this win for them and let people in the class know that we’re still here and we're not going away.”

After six of 15 rounds, Sampey and Krawiec currently sit second and seventh in the Pro Stock Motorcycle Championship standings with 436 and 377 points, respectively. The Vance & Hines/Mission Suzuki Pro Stock Motorcycle team will be back in action July 15-17 at the Dodge Power Brokers NHRA Mile-High Nationals in Morrison, CO.

About Vance & Hines
The Vance & Hines brand has always been about enhancing the exhilaration of the motorcycle ride. It started over 40 years ago, when Terry Vance and Byron Hines were two young enthusiasts in the fledgling Southern California motorcycle drag race scene. Terry always wanted to go faster and Byron knew how to make that happen. In short order, their on-track success and innovation drew the attention of other racers, riders and motorcycle manufacturers, which ultimately translated to commercial demand for their products and services. Today, the Company's mission and activity is the same; make bikes go faster on the racetrack and take those learnings to make impactful products for riders around the world. Since the Company's inception in 1979, it has run factory race programs in partnership with Suzuki, Yamaha, Ducati and Harley-Davidson in drag racing, road racing and flat track. Vance & Hines is based in Santa Fe Springs CA and has its Racing Development Center in Brownsburg IN. Learn more about the company's history and products at www.vanceandhines.com.