The GSX-R750 Continues to Add Trophies to this Season

While it was Vision Wheel M4 ECSTAR Suzuki’s Sam Lochoff who did the honors on Saturday, 16-year-old Tyler Scott took his turn in the spotlight in Sunday’s MotoAmerica Supersport contest.

Scott leaped to an early lead aboard his Suzuki GSX-R750 before settling into a race-long defense of second position. Despite facing heavy pressure on his rear wheel throughout the race, Scott kept his head and protected his racing line like a crafty veteran. 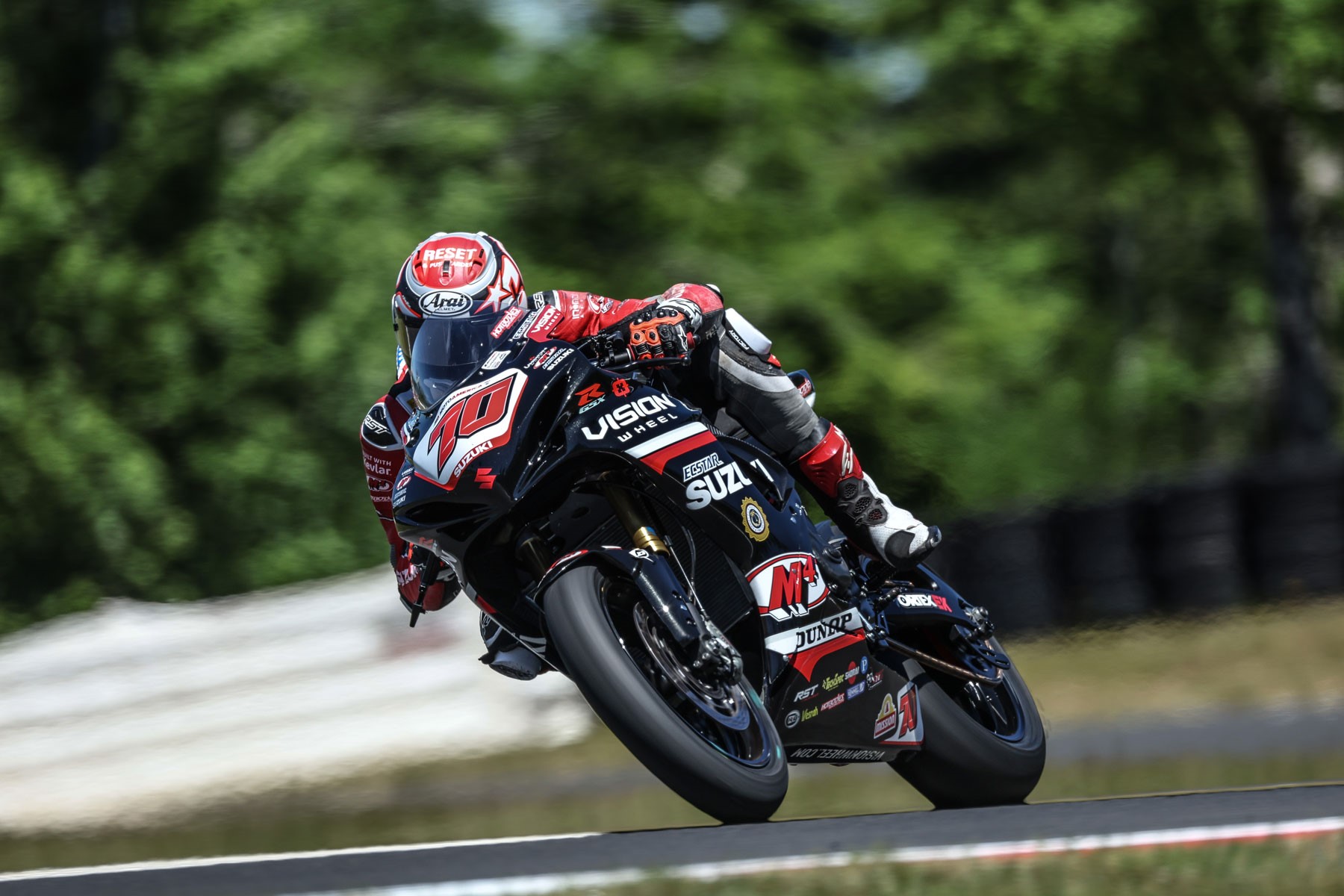 With another podium for Tyler Scott (70), he is looking to carry the momentum to Laguna Seca.

Demonstrating racecraft beyond his years, Scott managed to keep his rival corralled behind him to the checkered flag. The runner-up result was the rising star’s fourth podium finish of his rookie Supersport season.

Scott said, “All weekend we've been challenged with some handling issues, but we finally figured it out on the last day and made it count for the podium. I knew I had an aggressive rider on my back wheel. If I gave him an opportunity, he would have put a pass in there. The last five laps, I just put my head down and tried to keep 100% the best pace I could go.” 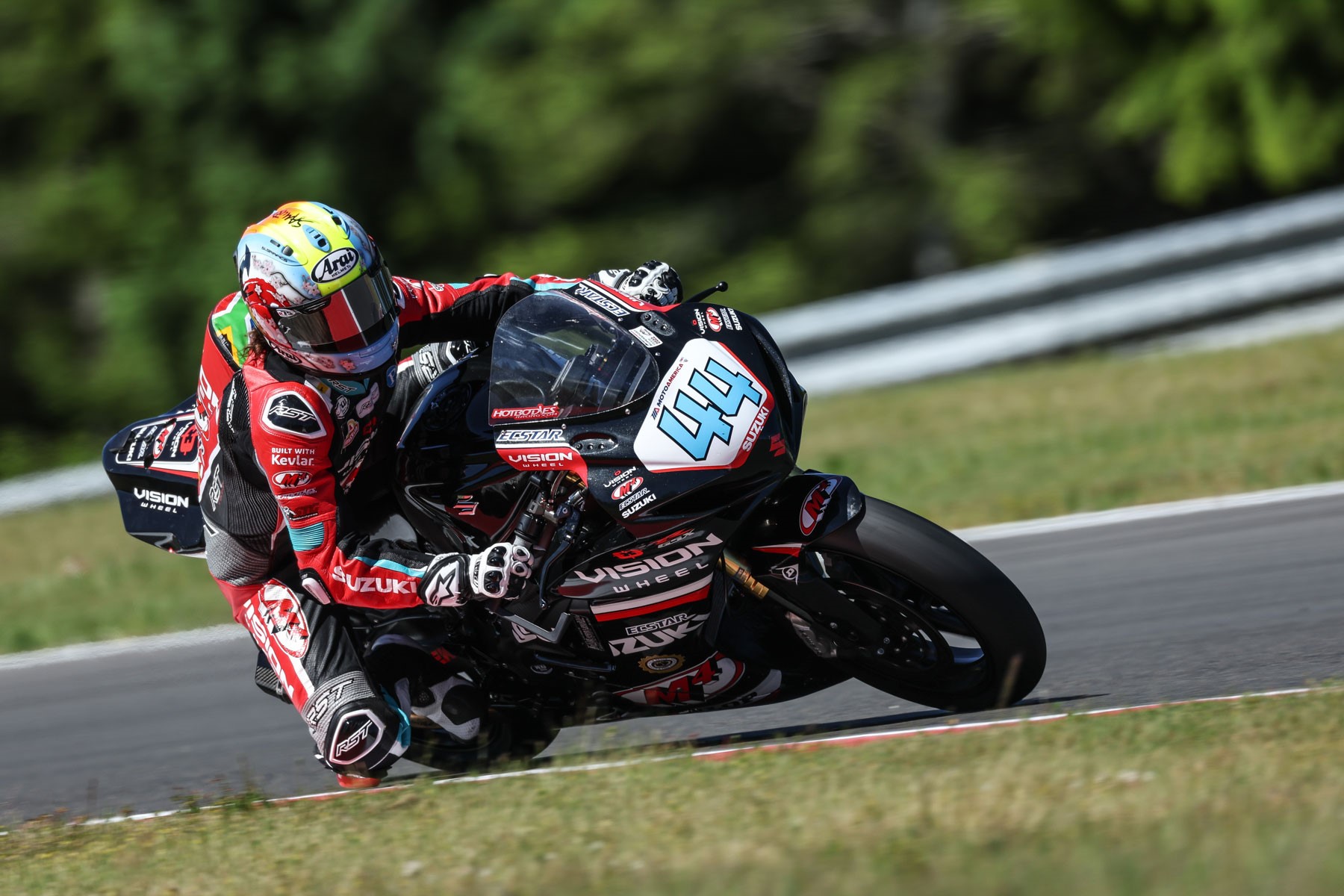 After a tough Race 2, Sam Lochoff (44) is ready to heal up before the upcoming round at WeatherTech Raceway.

Unfortunately, the day wasn’t nearly so kind to Lochoff. The South African, already suffering from a painful broken ankle, crashed while running in fifth early. He remounted and returned to the pits for a quick check and adjustment before returning to the fray. Lochoff was awarded a championship point for his gritty effort with a 15th-place result.

Liam Grant (90) continues to gain confidence on his GSX-R750 with a career-best sixth place.

Third Vision Wheel M4 ECSTAR Suzuki Supersport ace Liam Grant stepped up to fill the void. The up-and-coming rider earned sixth – his best Supersport result yet – as he continues to build confidence and speed in his rookie campaign.

Meanwhile, the squad’s MotoAmerica Superbike duo scooped a pair of top-ten finishes aboard their GSX-R1000Rs as well on Sunday. Richie Escalante made good on his impressive pace at the undulating circuit with a solid sixth-place performance. The premier-class rookie made a bid for a top-five, but ultimately fell just 0.171 seconds short at the flag.

Escalante said, “To be honest, I am very happy with this weekend. Road America was very difficult for me, but I trained hard and was eager to get back on the bike at the Ridge, which I feel is easier for me to get up to speed. 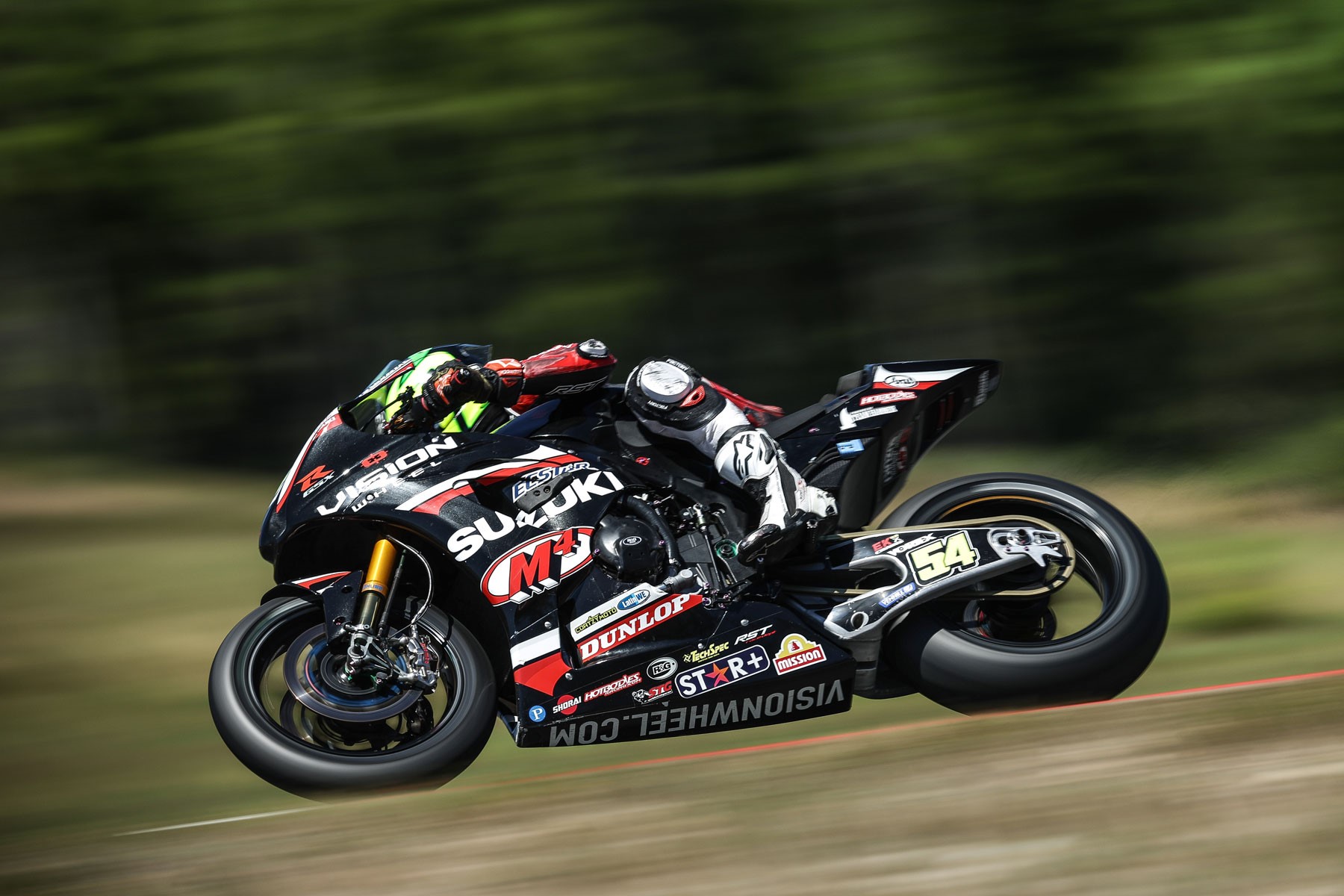 After a sixth-place finish, Richie Escalante (54) is continuing to make strides aboard his Vision Wheel M4 ECSTAR Suzuki GSX-R1000R.

“I felt strong on Friday and was going well on Saturday until I had the crash. Thankfully, my body was okay and the Vision Wheel M4 ECSTAR Suzuki team worked hard to get me back in the race and we were able to get tenth. The race on Sunday felt great; I was in a competitive fight for position throughout, and I feel like we made a lot of progress. I know the areas where I need to improve and I am looking forward to Laguna Seca.”

With Jake Lewis unable to ride after suffering a broken thumb, bruised hip, and banged up elbow in Saturday’s fall, Team Hammer test rider David Anthony filled in as a substitute. The Australian proceeded to put forth a steady effort to collect a tenth-place finish for the team.

Team Hammer will next head to Laguna Seca Raceway in Monterey, California on July 8-10.

ABOUT VISION WHEEL
Founded in 1976, Vision Wheel is one of the nation’s leading providers of custom wheels for cars and trucks, and one of the first manufacturers of custom wheels and tires for ATVs, UTVs, and golf carts. Vision Wheel looks beyond the current trends and to the future in developing, manufacturing, and distributing its wheels. Vision’s lines of street, race, off-road, American Muscle, and Milanni wheels are distributed nationally and internationally through a trusted network of distributors. Vision Wheel also produces the Vision It AR app to allow users to see how their wheel of choice will look on their vehicle before purchase and installation. For more information on Vision Wheel, visit www.visionwheel.com.