BREA, CA – June 20, 2022 —  Vance & Hines/Mission Suzuki Pro Stock Motorcycle rider Angelle Sampey launched her Suzuki Hayabusa to her second top qualifying performance of the year and a final-round appearance of the season at the NHRA Thunder Valley Nationals on Sunday in Bristol, Tennessee. 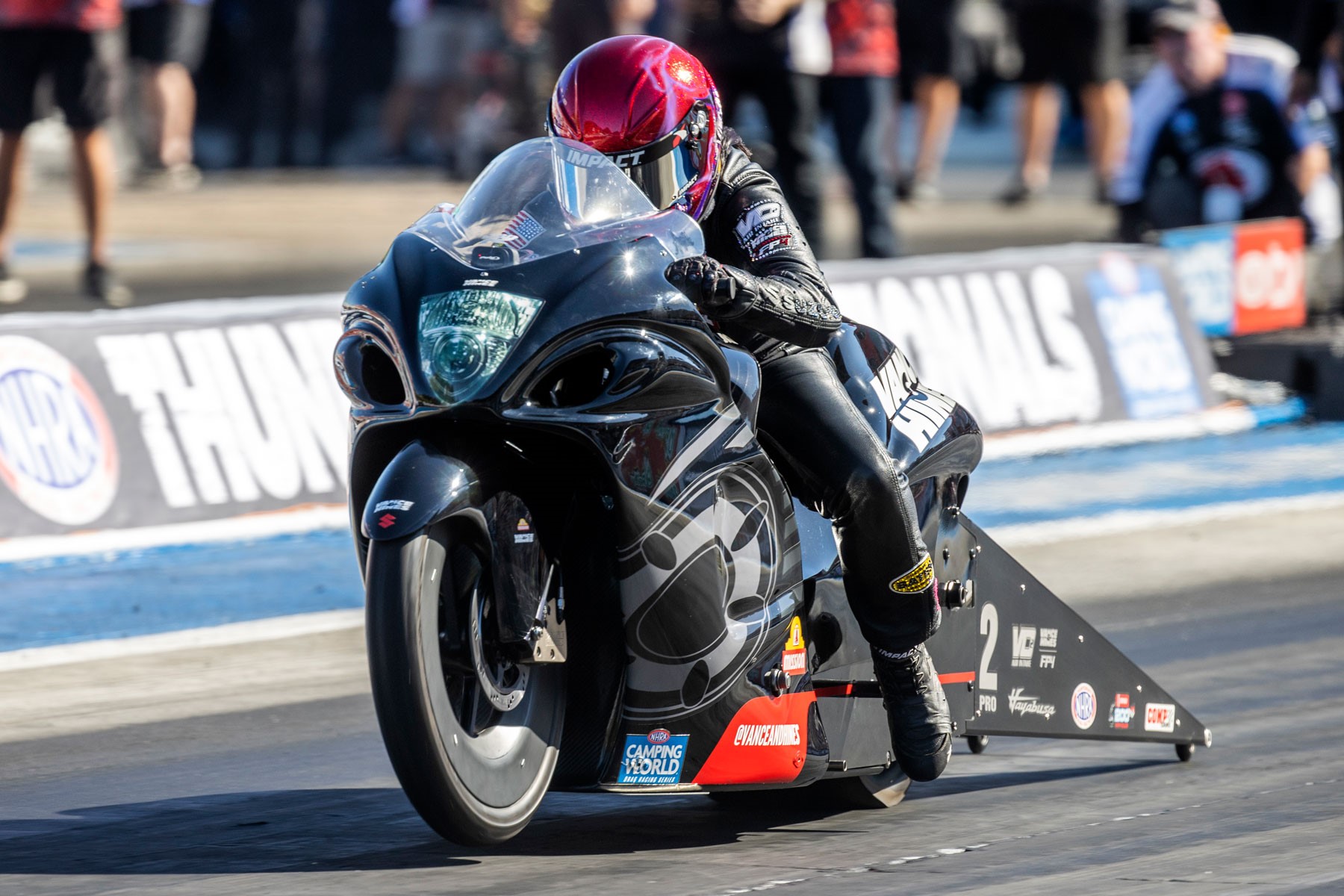 After posting a 6.784-second/196.04 mph run to qualify in the number one spot for the 55th time in her career, the most of any rider in the Pro Stock Motorcycle class, Sampey began her charge to the final round with a 6.866-second/195.05 mph pass in the first round to eliminate 2010 Pro Stock Motorcycle champion LE Tonglet. In the second round, she defeated Ryan Oehler with a 6.900-second/194.80 mph pass. Sampey earned a trip to her 79th final round appearance by defeating Marc Ingwersen with a 6.907-second/197.54 mph run in the semi-final round. 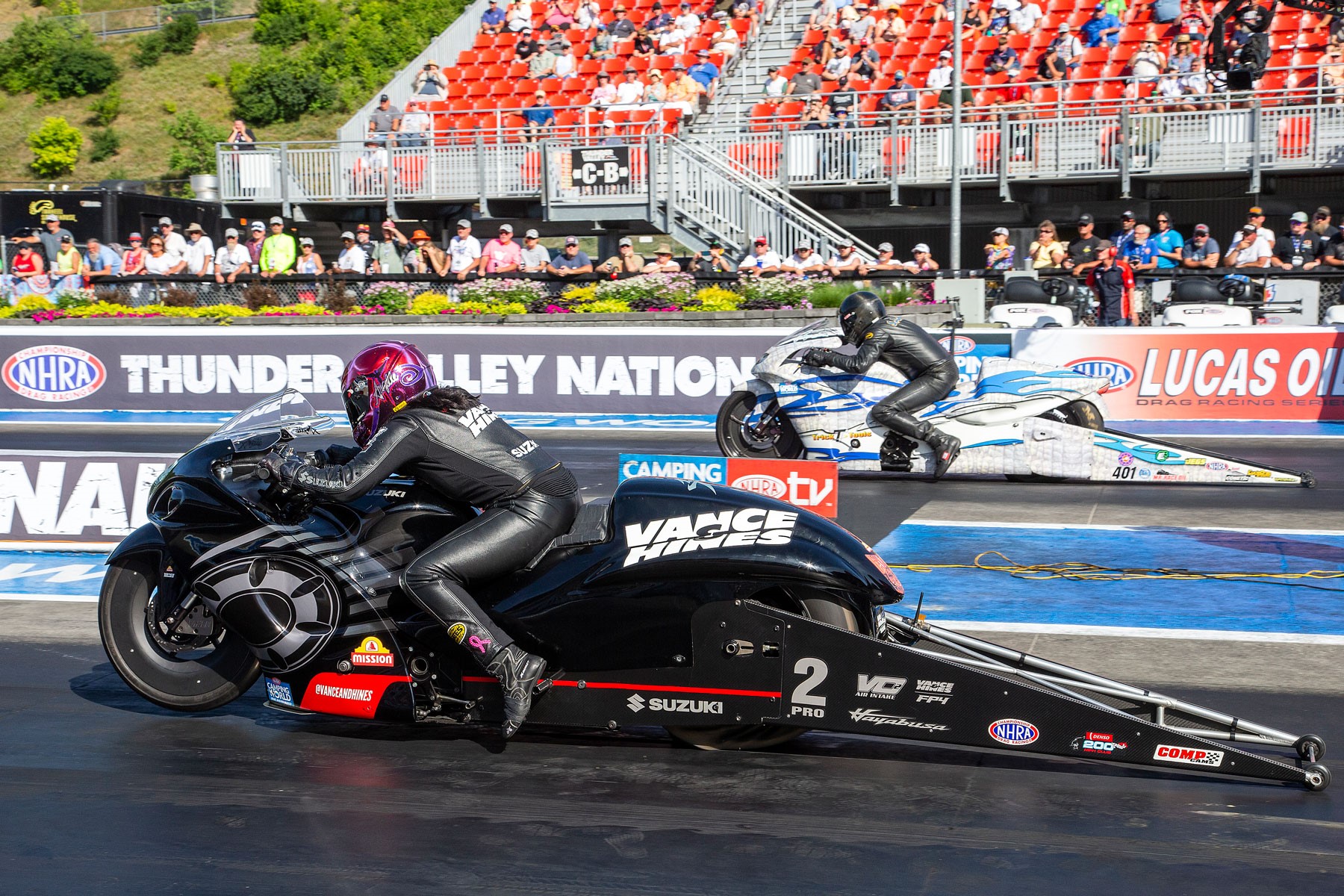 The all-Suzuki final between Angelle Sampey (2) goes to Jerry Savoie (401).

Sampey faced fellow Louisiana racer Jerry Savoie in the final round, but a red-light foul at the starting line ended her hopes of repeating her 2021 win at Thunder Valley, handing Savoie, who also races a Suzuki, his 14th career Pro Stock Motorcycle win. Suzuki congratulates Savoie on his victory.

“Andrew (Hines) did a wonderful job tuning me to number one qualifier, and then today I was on a roll. First and second round, I was doing my job along with the team always doing a great job,” Sampey said. “In the third round, I got lucky. It was a decent run, but I was late leaving the line. So it was a good thing that Marc slowed up and I was able to go to the final. I consider that my lucky round.”

“In the final, I knew exactly what I had done to mess myself up in the third round. I wanted to make sure I fixed that and reminded myself of all the things I wanted to do right. I really felt I had done everything right. When I released the clutch and saw the red light come on, I don't really have an answer for that,” she said. “Even with the disappointment, this weekend is a confidence builder. I know we have everything we need to win. I have the confidence to know that I can do this. That's what I learned today. I made a mistake. I'm going to learn from it, and I'm going to move on. Luckily, we get to go straight to Ohio and do this again really soon, so I don't have to go home and sit too long and think about it.” 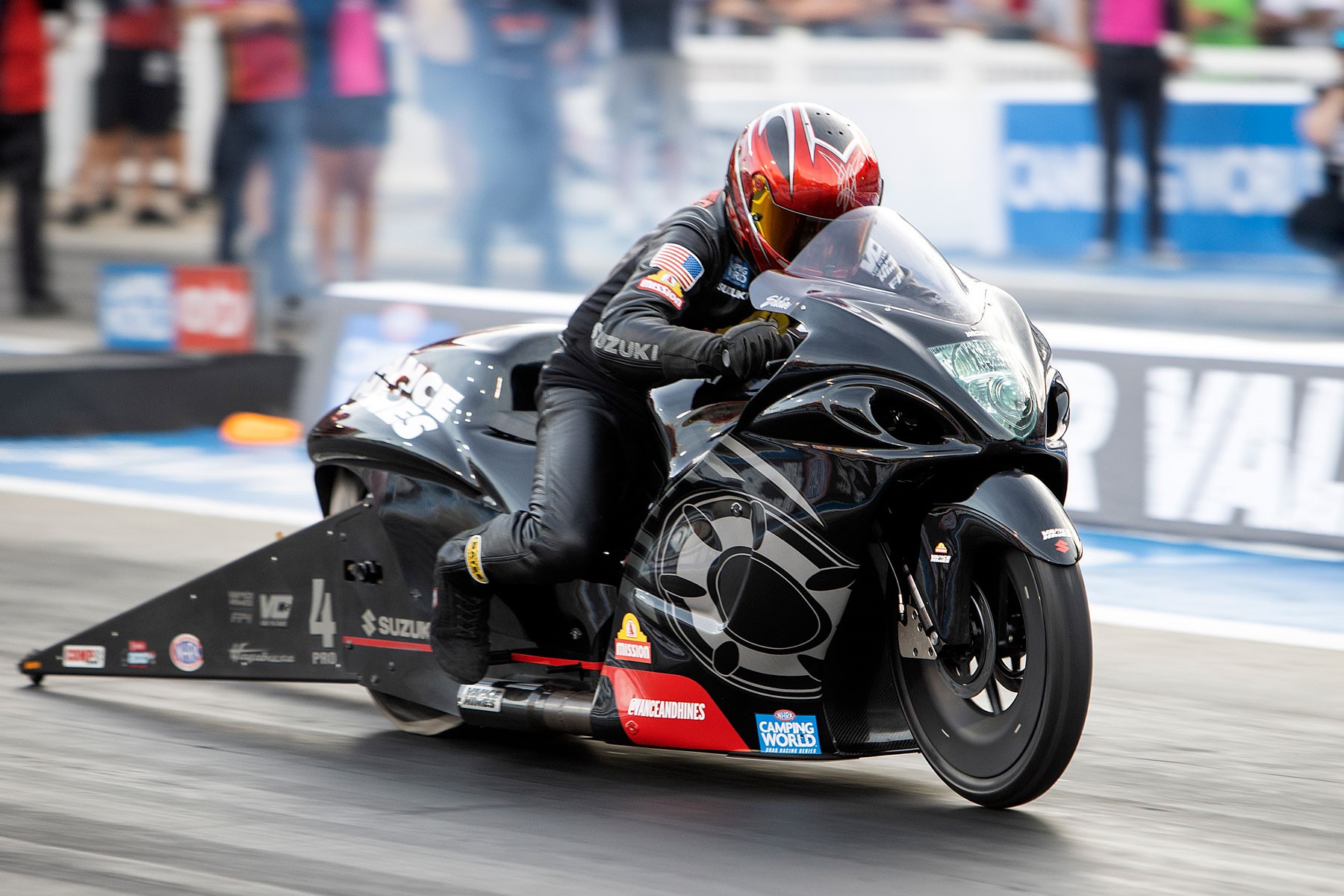 Eddie Krawiec (4) looking to make strides in the next round in Norwalk, OH.

For Sampey’s teammate Eddie Krawiec, Bristol was an opportunity to continue refining the tune-up on his own Hayabusa, which remains a work in progress. After qualifying in the tenth position with a 6.956-second/195.00 mph run, he lost a close first-round match-up to eventual race winner Jerry Savoie on a holeshot. Savoie’s 6.891-second/195.05 mph run was just enough to beat Krawiec’s 6.880-second/195.05 mph pass thanks to a 0.020-second quicker starting line reaction time.

“Losing in the first round, it was a great race and my bike showed some potential there. We learned some things that will transition to the rest of the year for me. So I'm kind of excited. I wish I had the opportunity to make a couple more runs,” Krawiec said, noting that he has been doing the bulk of the team’s experimentation with new parts and tuning settings so as not to derail the performance of Sampey’s bike. “We’re trying to change parts and pieces on mine to have a better understanding if things work or if they don’t, and not do them on hers because we want to keep it running well. I think I'm onto something on my own, and I’m going in the right direction.”

Crew Chief Andrew Hines was pleased with the team’s performance despite grappling with some challenges presented by the racing surface at Bristol.

“This track is unique because we’ve got some elevation here and bumps. It takes a little bit different tuning approach than what we've been doing the last few races, being at closer to sea level race tracks. And for the rider, the bumps obviously aren't pleasing. But NHRA did a better job after the first qualifying session getting enough traction compound on the track to where if you hit the bumps, it wouldn't completely break the tire loose and keep spinning the rest of the way. So that made it a lot more ridable, and a lot better racing,” Hines said.

“It's nice to get number one qualifier. I was able to experiment a little bit in the last qualifying session to see what might work for today, and what I tried didn't work, so it showed me the direction to go. Angelle’s bike spun the tire pretty hard in the final down track, so it was on pace to probably go as well as it did in the first round, a 6.86, 6.87, or something like that. But you can't win races when you leave early.”

After five of 15 rounds, Sampey and Krawiec currently sit fifth and sixth in the Pro Stock Motorcycle Championship standings with 314 and 313 points, respectively. The Vance & Hines/Mission Suzuki Pro Stock Motorcycle team will be back in action June 23-26 at the Summit Racing Equipment NHRA Nationals in Norwalk, OH.

About Vance & Hines
The Vance & Hines brand has always been about enhancing the exhilaration of the motorcycle ride. It started over 40 years ago, when Terry Vance and Byron Hines were two young enthusiasts in the fledgling Southern California motorcycle drag race scene. Terry always wanted to go faster and Byron knew how to make that happen. In short order, their on-track success and innovation drew the attention of other racers, riders and motorcycle manufacturers, which ultimately translated to commercial demand for their products and services. Today, the Company's mission and activity is the same; make bikes go faster on the racetrack and take those learnings to make impactful products for riders around the world. Since the Company's inception in 1979, it has run factory race programs in partnership with Suzuki, Yamaha, Ducati and Harley-Davidson in drag racing, road racing and flat track. Vance & Hines is based in Santa Fe Springs CA and has its Racing Development Center in Brownsburg IN. Learn more about the company's history and products at www.vanceandhines.com.