Brandon Hartranft (41) delivered his best finish of the 2022 season with eight rounds remaining in the series.

Brandon Hartranft used the event to break from a point tie with his Twisted Tea Suzuki teammate. After knocking on the door of a top ten in both motos, "The Brick" used consistency to climb his Suzuki RM-Z450 two spots up in the series’ championship points chase.

"It was a much better weekend for me," Hartranft said. "We made some improvement this past week. We actually went to a slower [detuned] engine, moving towards last year's set-up, but with a few differences. The day went a lot smoother. I feel like I rode really solid in both motos. I definitely like the east coast tracks. High Point was very gnarly. This track was rough, and you had to be pretty on the money and, those are some of the conditions where I can excel. We ended up eleventh overall, just shy of a top ten. The field is very competitive right now, so I need to work on my starts. I'm definitely happy with my progression, but I'm bummed that it's round four and, I’m only now starting to figure it out. But it's all good; we'll keep fighting and will be in the top ten shortly." 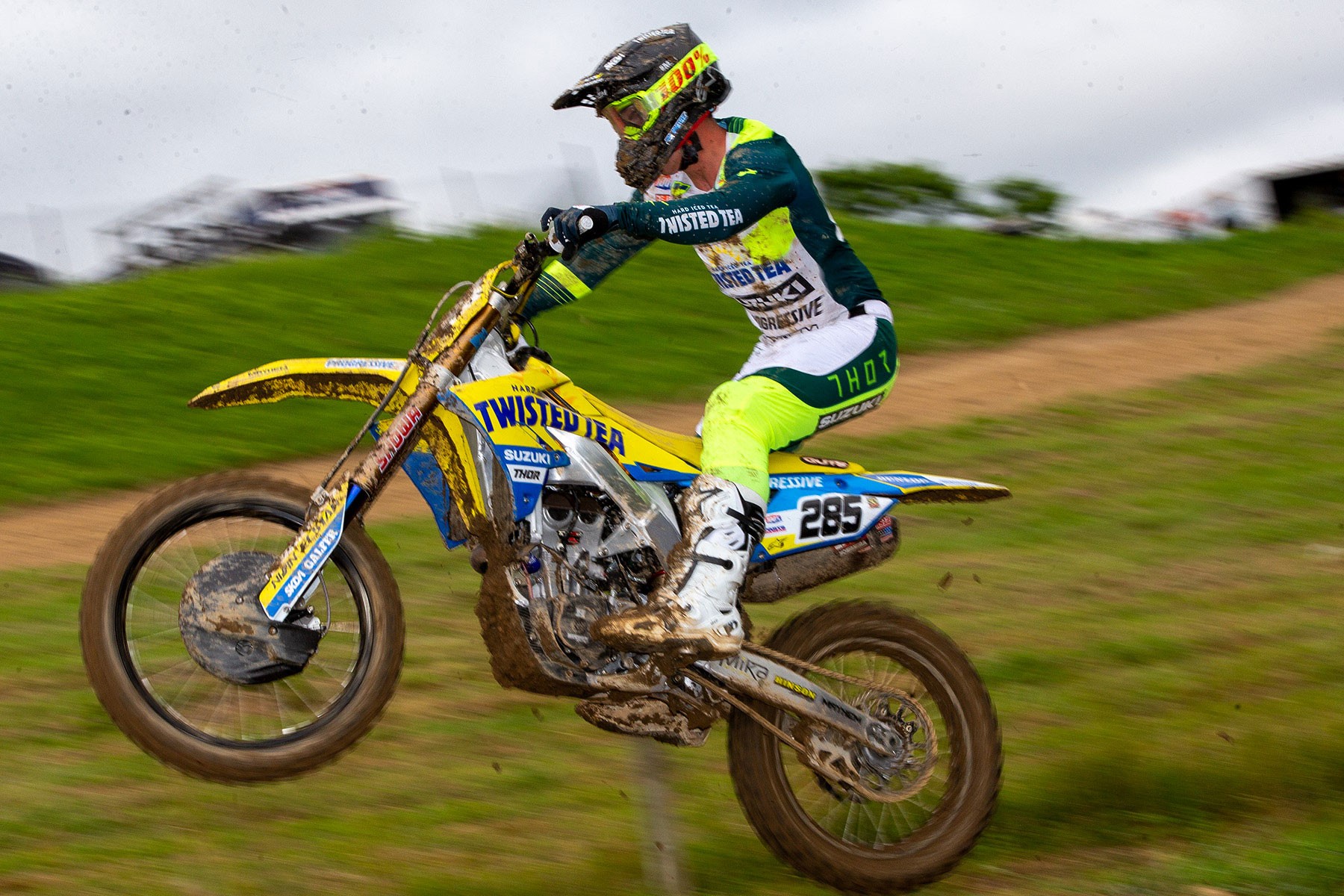 Marshal Weltin (285) had another strong outing in his second appearance on the Twisted Tea Suzuki team.

After being recruited onto the Twisted Tea Suzuki team mid-season, Marshal Weltin looked natural slicing his Suzuki RM-Z450 through the deep ruts and charging over the steep hills of the Pennsylvania track. Weltin charged in the early laps of the second 450 moto and nearly broke into the top ten.

"Round four went pretty well," said Weltin. "The team's doing great, the bike's great, and I'm happy with everything. We're working well together and are just going to keep picking away and try breaking into that top ten. I feel like I’m riding pretty strong, but was a little tight this weekend. Overall, I think I'm in a good place and I’m stoked for my home race at Red Bud, coming up. I'm really aiming to put in some strong results and show up for the home crowd."

Derek Drake (331) had the speed, but a mid-week illness held back his stamina for that inevitable breakthrough ride.

Derek Drake again showed impressive speed, charging through the pack early in both 250 class motos. He finessed his Suzuki RM-Z250 to another strong race day on his return to full-time motocross racing this summer.

"In the first moto, I worked my way up to eleventh." Drake added, "Then I got fatigued from being sick all week. I just had no energy for the second moto. On the positive side, the bike felt solid out there. The track was super rutty and really tricky!" 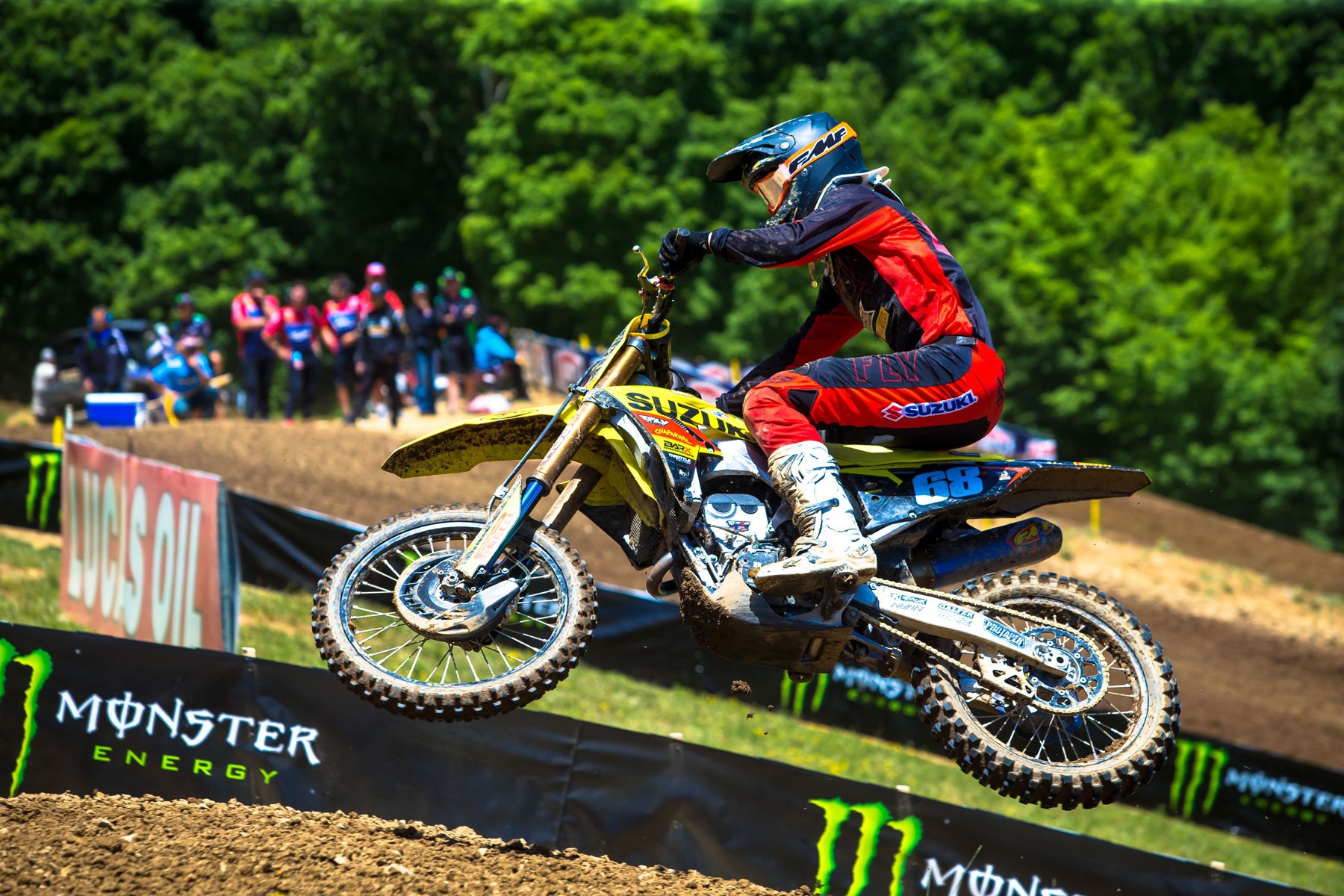 Preston Kilroy continued his march back to racing with two strong rides aboard his BarX/Chaparral Suzuki RM-Z250. After missing the first two rounds after returning from injury, Kilroy is back up to pace for a strong summer of racing.

"Overall, the weekend was better than last weekend. I'm still working to find my groove." Kilroy commented. "The track was really tough, which didn't make things easy. I’m making small improvements each weekend. There's lots of work to do with this two-week break, but I'm excited to get after it."

"We're starting to gain a little momentum as we get into the middle stretch of the championship," said Dustin Pipes, Team Manager of the Twisted Tea/H.E.P. Motorsports/Suzuki Presented by Progressive Insurance team. "Marshal is continuing to get familiar with the bike and it's showing on the racetrack with him battling within the top 10 in the beginning of the motos. Brandon had a better day with an eleventh overall and is starting to look more like himself. Dave [Dye], Clark [Jones], and Jamie [Ellis] did a great job on the new motor spec for him and it allowed for a more complete race. He was in a battle every lap of both motos and ended up on the better end of both. Once he improves his starts, he'll be well inside the top ten."

The teams and racers have a one-weekend break, then return to action on Saturday, July 2nd for the wildly popular Red Bud event in Buchanan, Michigan on its traditional July 4th holiday weekend.