Brea, CA (August 30, 2021) – More hot and humid weather met the racers at round ten of the AMA Pro Motocross Series, but the Suzuki racers were undaunted and brought back top ten moto and overall finishes in both classes. Twisted Tea/H.E.P. Motorsports/Suzuki's Brandon Hartranft put his Suzuki RM-Z450 into the top ten in both motos and on the overall results sheet to net his career-best finish in the 450 class. The BarX/Chaparral/ECSTAR Suzuki racers put their Suzuki RM-Z250s' power to the Indiana soil to garner top ten moto finishes from both rookie riders. Dilan Schwartz grabbed his fifth top ten overall of the year and Preston Kilroy earned his second top ten moto finish after only three rounds. 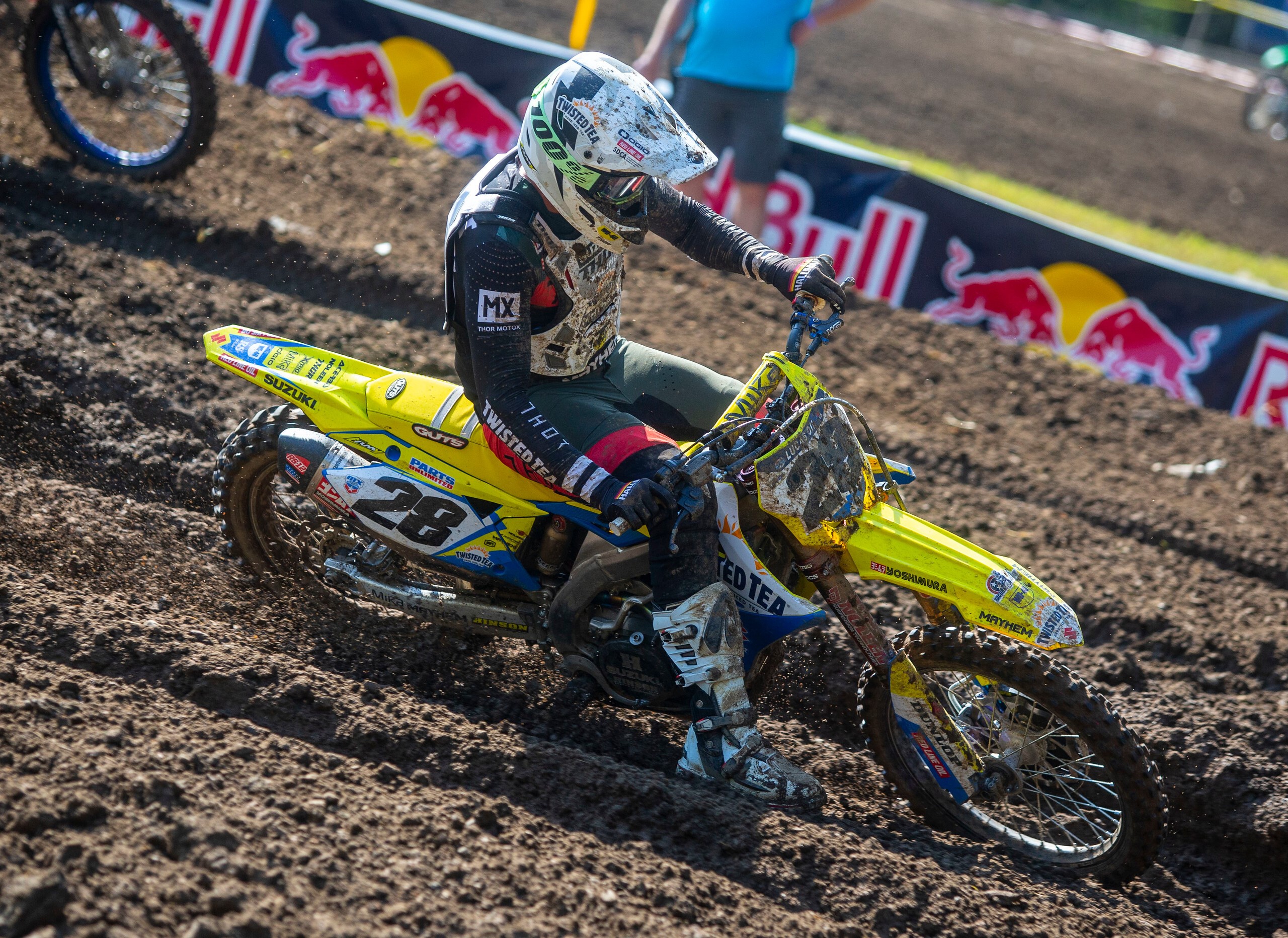 Brandon Hartranft (28) was impressive with a career-best ninth-place overall finish on his RM-Z450.

The track was deep with ruts and offered a mixture of hard and soft conditions, but Brandon Hartranft and his Suzuki RM-Z450 were flying from the start of the day. After qualifying inside the top ten in both sessions out of 73 total entries, Hartranft started up front in the first moto and battled inside the top ten right up to the checkered flag. Hartranft's second moto start wasn't as strong, but the 450 rookie quickly pushed his way into the top ten. "The Brick" held the top group's pace and brought home another top ten moto finish to earn him his first 450-class top ten overall finish.

"It was a good day," said Hartranft. "I ended up P-9 overall, so that was a solid finish. I was pretty much in ninth to tenth spot throughout qualifying and racing. I really like this track, so I was pretty stoked to come here. I was in about sixth place at the start of the first moto, but then dropped back to ninth. In Moto 1 I didn’t really feel that well. I rode much better in Moto 2. I fought hard for ninth and almost got to eighth on the last lap. I'll take the positives from this weekend and with the team we'll look forward to the last two rounds and hopefully we can be back in the top ten." 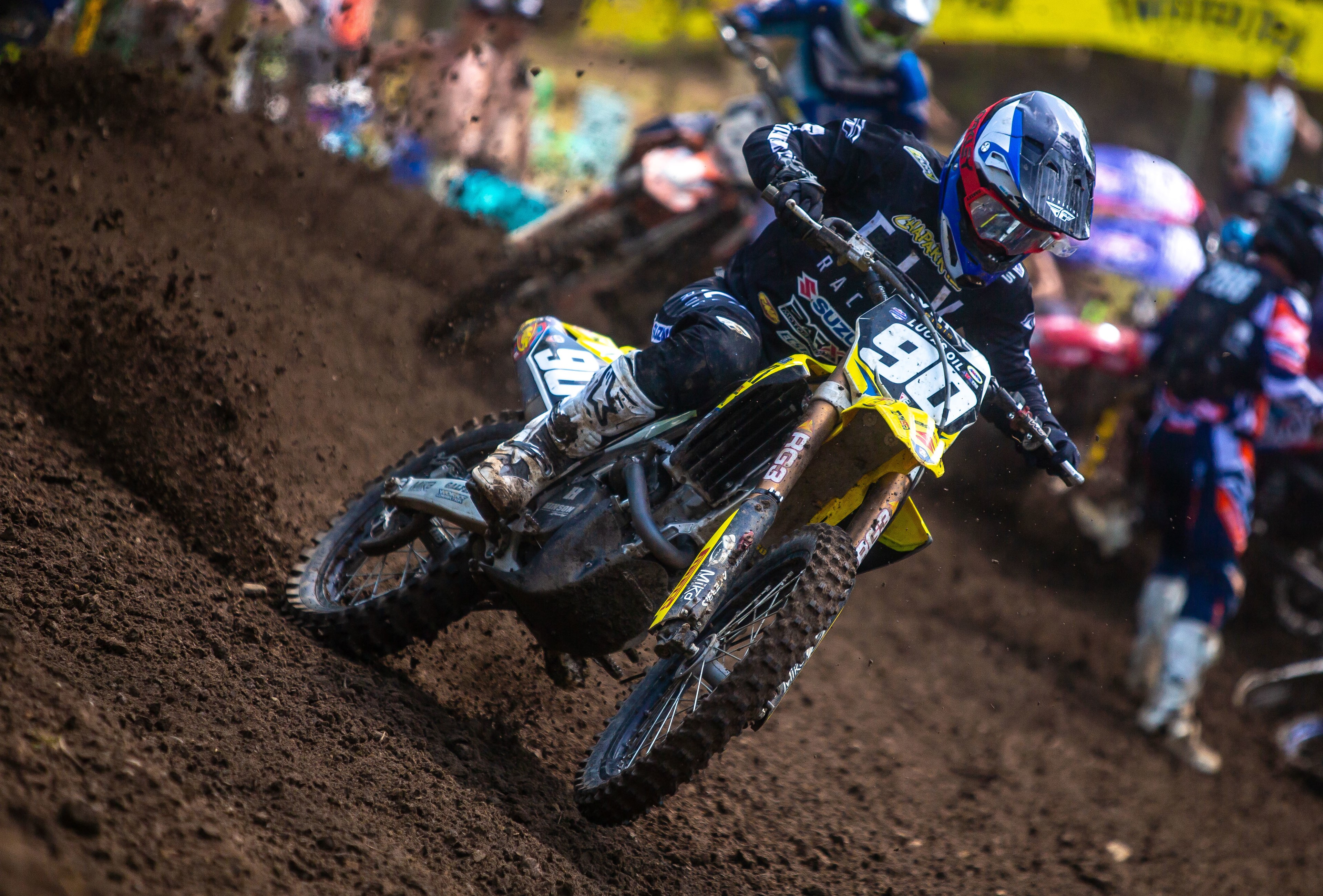 Dilan Schwartz (90) continues to improve, posting solid results in both motos on his RM-Z250.

Dilan Schwartz continued to improve his speed and adapt to pro racing. In his first pro season he's delivered top ten overall finishes at half of the races and his pace around the high-speed Crawfordsville track indicated he has many more in store. Schwartz got off to a great start in the first moto, but a slight mistake on the opening lap dropped him out of the points. He quickly rebounded from outside the top twenty and climbed comfortably into the top ten before the 30-minute plus two lap moto was over. Schwartz started the second moto with a costly tip over in the first corner, but he pushed his ECSTAR-protected RM-Z250 past the pack to secure a top ten overall finish at the event; the performance moved him up one position in the championship points standings.

"It was a tough day for me," recalled Schwartz. "In the first moto I was in fourth for about a quarter of a lap. Then I got tangled up with another rider and went down. I had a decent comeback to ninth place. In Moto 2 I crashed in the first turn and got ran over a few times; someone hit my bike and ripped the top of the brake line off, so I had no front brake. Then about halfway through the race the front brake line actually wrapped around my front hub because it was still attached at the bottom bracket. It locked the wheel of the face of a jump which caused me to crash. After that I was just in salvage mode and could only get up to thirteenth. I'm happy with the way I rode and with my fitness so I’m looking forward to a better day next weekend at Pala." 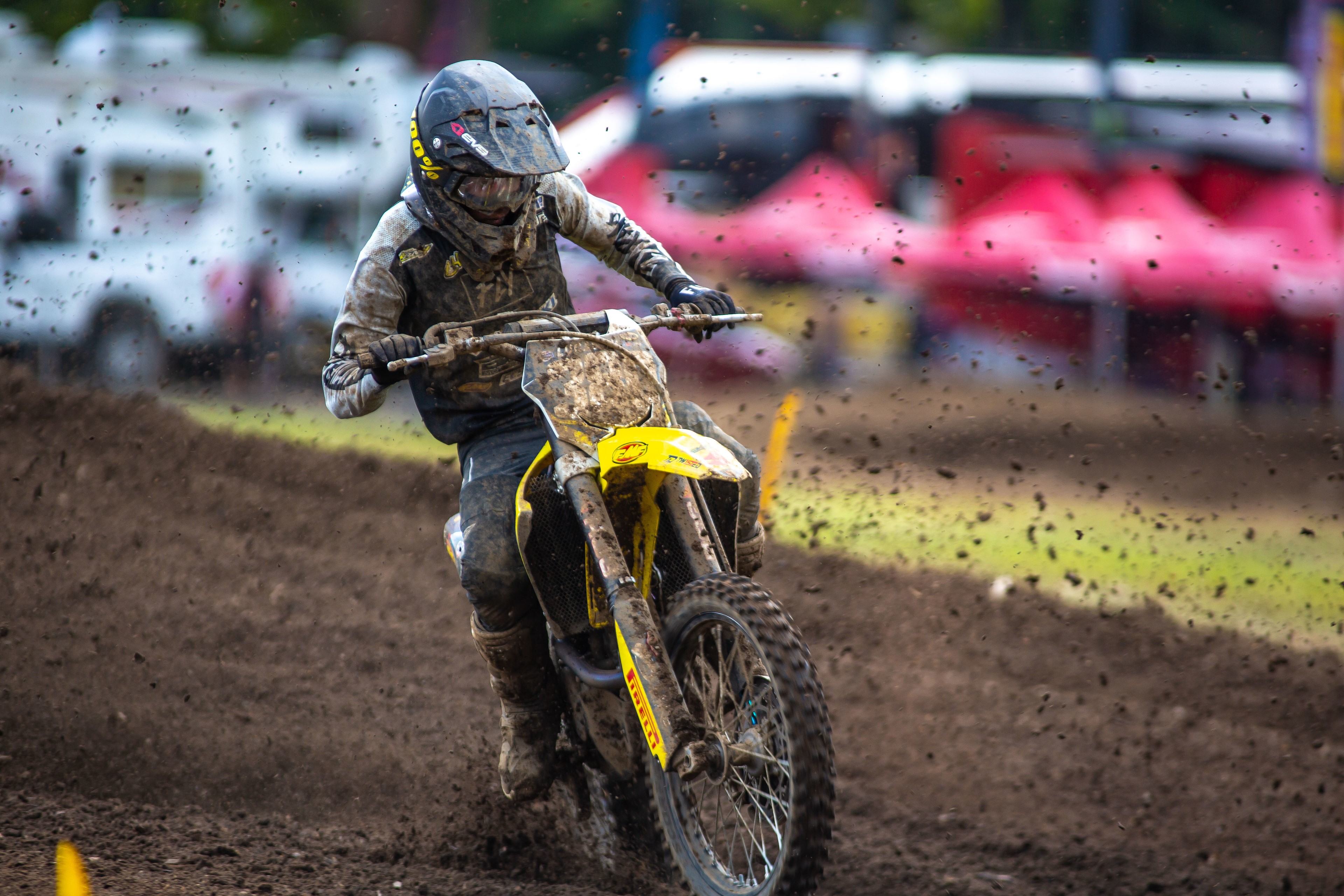 In only his third pro race since a strong wrap up to his amateur career, BarX/Chaparral/ECSTAR Suzuki's Preston Kilroy continued to impress, running inside the top ten in only his fifth pro moto of 2021. Kilroy couldn't follow up his top ten Moto 1 finish in the second moto and unfortunately missed a top ten overall finish by just one spot. Kilroy did earn more championship points and pushed forward on the season leader board.

"Overall, Ironman was pretty good!" said Kilroy after the second moto. "I'm slowly but surely starting to feel more comfortable each weekend. In Moto 1 I had a pretty good start but had a little bit of trouble finding my flow at the beginning. But then I was able to switch up my lines a little bit and put in some good laps during the last ten minutes, which put me in tenth place. In Moto 2 I didn’t have the greatest of starts, but was able to make some passes. I was feeling good on the bike, but went down trying to pass into tenth. I got up and ended up fourteenth. I just need to clean some things up and keep improving!"

Missing in action, Twisted Tea/H.E.P. Motorsports/Suzuki's Max Anstie was unable to race after unfortunately testing positive for COVID. The Englishman was improving his speed and results as the season progressed and the fans and team hope Anstie recovers quickly and passes the protocols to return to racing before the season concludes.

"It was a step in the right direction for Brandon at Ironman this weekend," Twisted Tea/H.E.P. Motorsports/Suzuki Team Manager Dustin Pipes summed up. "He was consistent all day, finishing ninth in the final qualifying session as well as in both motos for ninth overall. I felt that he could have raced within the sixth to seventh place range, but today was still a positive. With Max unexpectedly missing the race due to COVID, Brandon handled the pressure well flying the lone flag for the team. The staff worked cohesively all day, and everything is moving towards a strong finish to the year. My thoughts are with Max going forward as he looks to get over his illness."

The race series now travels to California for the second round to be held at Fox Raceway in Pala, California. The Suzuki racers are on a tear in the final rounds of the season and are ready to continue their string of great rides and finishes at the final two rounds.