Brea, CA (August 23, 2021) – Suzuki racers put RM-Zs into the top ten in every moto at round nine of the 2021 AMA Pro Motocross Series in Mechanicsville, Maryland at the legendary Budds Creek Motocross Park. Twisted Tea/H.E.P. Motorsports/Suzuki's Max Anstie stretched his top ten moto rides in the premiere class to four straight and took home his second top ten overall finish in a row aboard his Suzuki RM-Z450. The BarX/Chaparral/ECSTAR Suzuki RM-Z250 of rookie Dilan Schwartz netted the young racer his fourth top ten overall finish with his own two top-ten moto scores. Anstie's Twisted Tea/H.E.P. Motorsports/Suzuki teammate Brandon Hartranft spent much of the day inside the top ten on his Suzuki RM-Z450, and Schwartz's BarX/Chaparral/ECSTAR Suzuki teammate Preston Kilroy, in only his second pro race this year, showed again he and his Suzuki RM-Z250 are front runners in the 250 class. 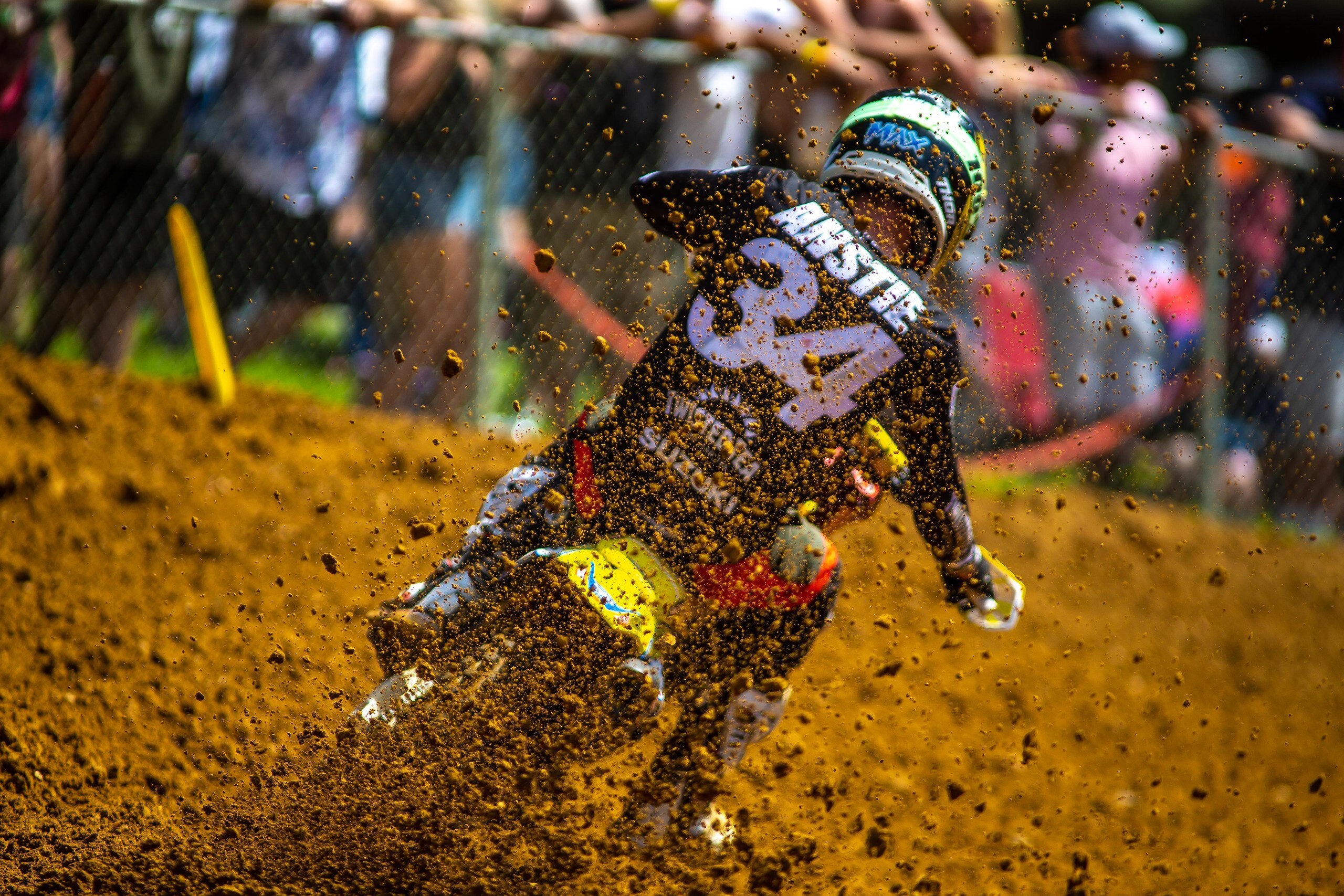 Max Anstie (34) continued his streak of consecutive top-ten overall finishes on his RM-Z450.

Anstie is riding stronger than ever in the home stretch of the 2021 motocross series. At the hottest race so far this year the Englishman and his Suzuki RM-Z450 fought through the top group to claim two more top ten moto finishes and a consecutive-weekend top ten overall finish. The two moto performances at Budds Creek raised him up another spot in the championship point standings. It's proving to be an incredible summer for the Twisted Tea/H.E.P. Motorsports/Suzuki team which is contesting the full outdoor series for the second time in the supercross-focused team's history.

"Tenth overall, solid day, another top ten," Anstie summed up. "We want more so we'll go back to the drawing board this week and see what we can do to make progress. I'm happy with the way that I rode. I just want to keep progressing, so we'll do some more work this week and get on it for next week." 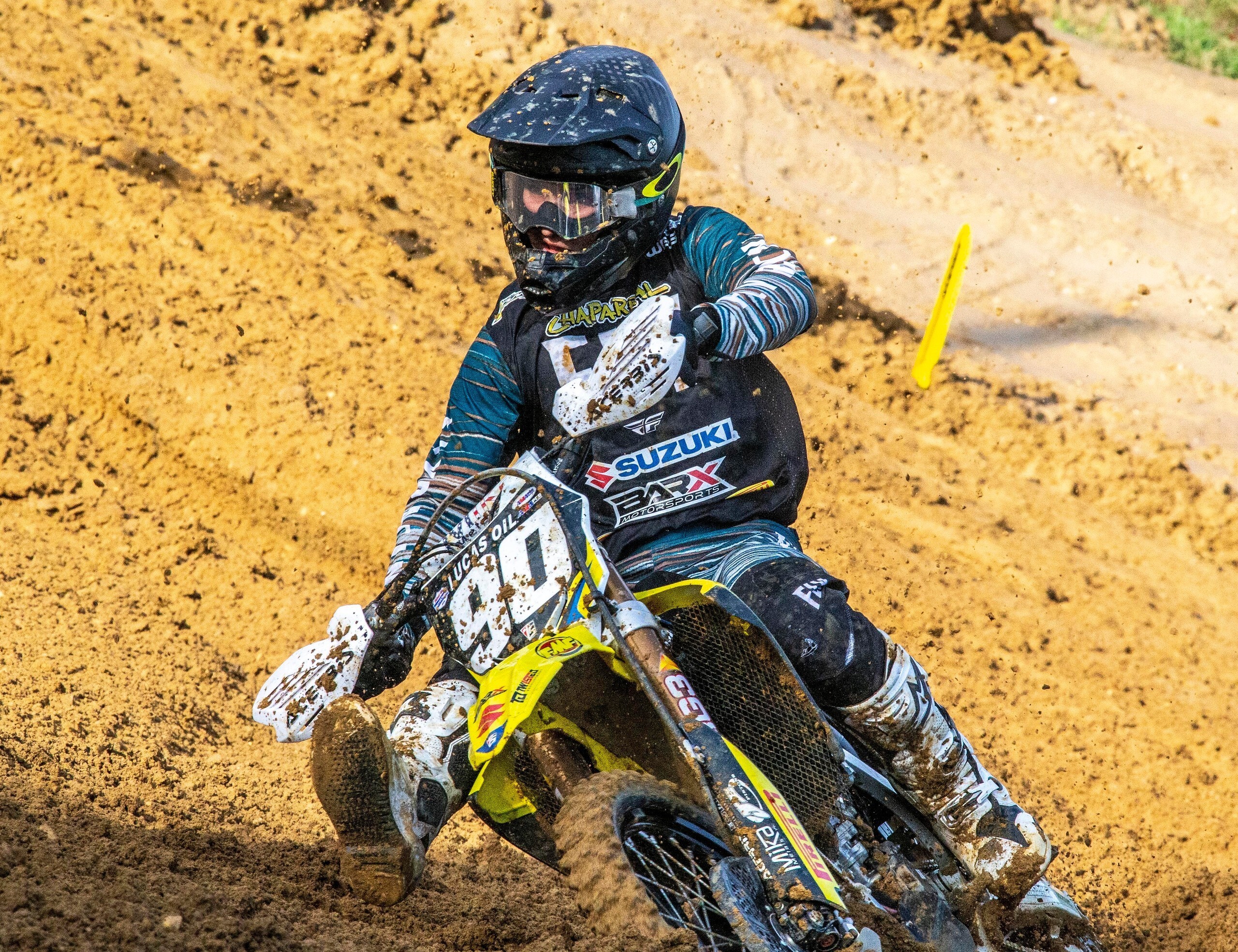 Dilan Schwartz's first moto charge was impressive, charging from a mid-pack start to reach the top ten with about 18 minutes left on the clock in the 30-minute plus two lap race. The rookie didn't stop there; he continued forward through the pack. A strong start in the second moto had Schwartz knocking on the door for a top five finish. His two top-ten moto scores earned him a top ten overall as well as his highest one-day points total so far in his young career. The effort moved Schwartz up one position in the 250 class championship points standings.

"Budds Creek was a step in the right direction," Said Schwartz after the racing. "I didn’t make as many mistakes and didn’t crash on the first lap this weekend. I just have to put a few more things together and we should see an improvement in moto scores. I'm happy with how the weekend went and I'm looking forward to Indiana." 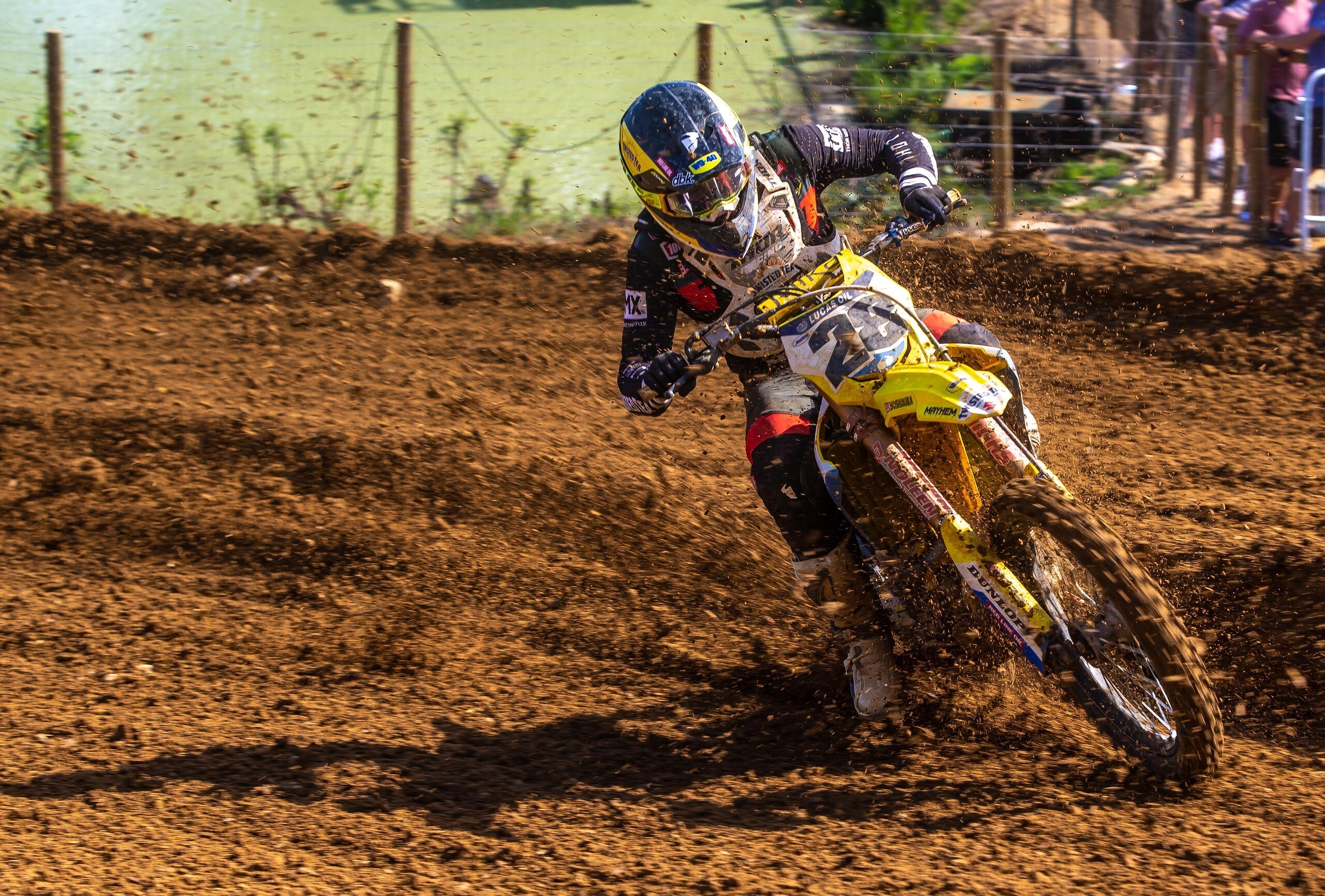 Brandon Hartranft (28) fought through an injury for a solid race result on his Suzuki RM-Z450.

Heavy Friday rains left a challenge for the racers with deep ruts on Saturday, precisely what Brandon Hartranft didn't need since coming into the weekend with an injury. In Moto 1, Hartranft charged hard from a poor start, climbing into the points at the moto's halfway point and passing further up through the pack until the checkers flew. With a better start in the second moto, Hartranft kept his Suzuki RM-Z450 inside the top ten for most of the race.

"It was not the best day. I struggled a little with the track all day. I'm actually from this area and I used to ride here as a kid." Hartranft then explained the issue he was contending with at the event, "This week we stayed here in Maryland. I had a little crash Wednesday and hurt my shoulder, so this week was almost like taking a few steps back. I've been making progress every weekend, but this one was definitely not ideal. I fought through the day and ended up 13th overall. I'm not pumped on it, but as long as I'm here fighting every weekend and racing that's all that matters. In Moto 1 I was probably outside the top 30 for a lap or two then I caught back up to 15th. In Moto 2 I had a good start and was fighting for the top ten for about 25 minutes then dropped back to 12th. It's just a learning year and day and we're just trying to take the positives out of each weekend and keep improving." 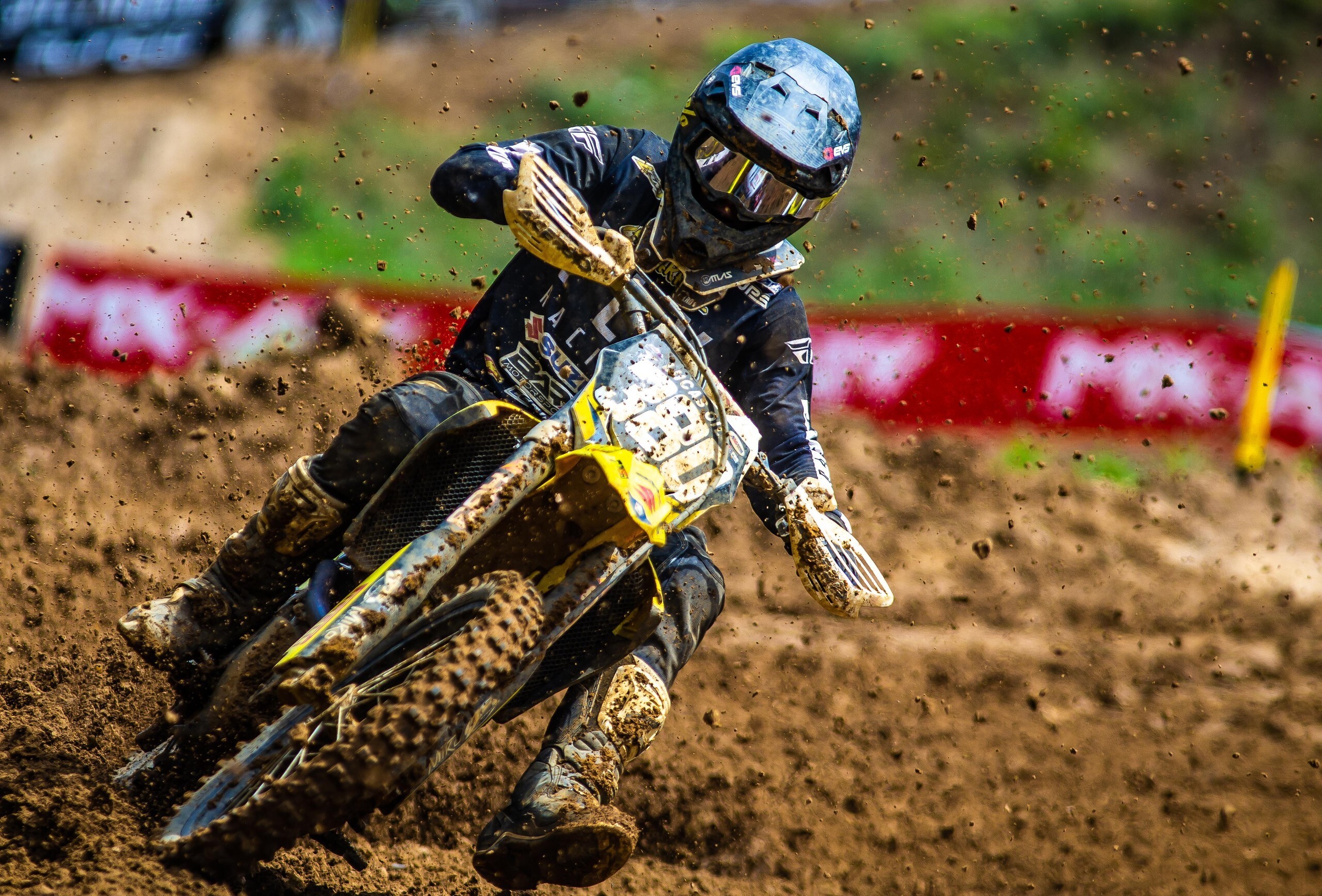 Preston Kilroy (380) continues to impress with strong race performances in only his second pro race of 2021.

In only his second pro race of 2021 after an impressive wrap-up to his amateur career, Preston Kilroy turned his speed into strong finishes ahead of many much more experienced riders in the class. The young racer looked fast and comfortable on the deep ruts and steep climbs aboard his Suzuki RM-Z250 which is protected by ECSTAR oil products.

"Budds Creek was pretty good!" Kilroy said after the race. "I'm still learning and trying to figure this stuff out the best I can, but I felt as if my riding was a lot better than last weekend. In Moto 1 I didn’t get a very good start, so I got stuck in a big pack of riders. It was very difficult to pass on the track. I was able to get a much better start in the second moto, but a couple of mistakes cost me. Overall, I’m happy with the way things are going and I’m excited to keep learning and progressing each weekend."

"Another top 10 performance at Budds Creek for the team," said Twisted Tea/H.E.P. Motorsports/Suzuki Team Manager of his 450 crew. "I’m glad we were able to string together multiple top 10s, but I feel like we still left some on the table. Still, it was a continued step in the right direction. Max was solid all day and Brandon rebounded after a poor Moto 1 performance to run at the front of the field most of the second moto. Our starts have been improving and once both athletes figure out their sprint speed for the first few laps, we will reach the next level."

With three events left in the 12-round series, the racers and teams will finish the series over consecutive weekends as the racing moves next to Crawfordsville, Indiana before returning to California for the final two rounds. The Suzuki racers have the momentum, and their bikes are performing brilliantly. Watch for a strong finish to the summer from the Suzuki teams.