Brea, CA (August 16, 2021) – The Suzuki racers attacked the high-speed, natural-terrain Unadilla track at round eight of the 2021 AMA Pro Motocross series where each rider battled or finished inside the top ten through the day's motos. Twisted Tea/H.E.P. Motorsports/Suzuki's Max Anstie claimed his best results of the year with back-to-back top ten moto finishes to put his Suzuki RM-Z450 into eighth overall. Anstie's Twisted Tea/H.E.P. Motorsports/Suzuki teammate Brandon Hartranft also brought in a top ten moto finish aboard his Suzuki RM-Z450 on the New Berlin, NY track. BarX/Chaparral/ECSTAR Suzuki welcomed a new racer to the professional division of the team and Preston Kilroy and his Suzuki RM-Z250 did not disappoint with a top ten moto finish at his first pro race of the year. Kilroy's BarX/Chaparral/ECSTAR Suzuki teammate, rookie Dilan Schwartz, used blazing track speed to overcome two early-moto setbacks and deliver strong results on his Suzuki RM-Z250. 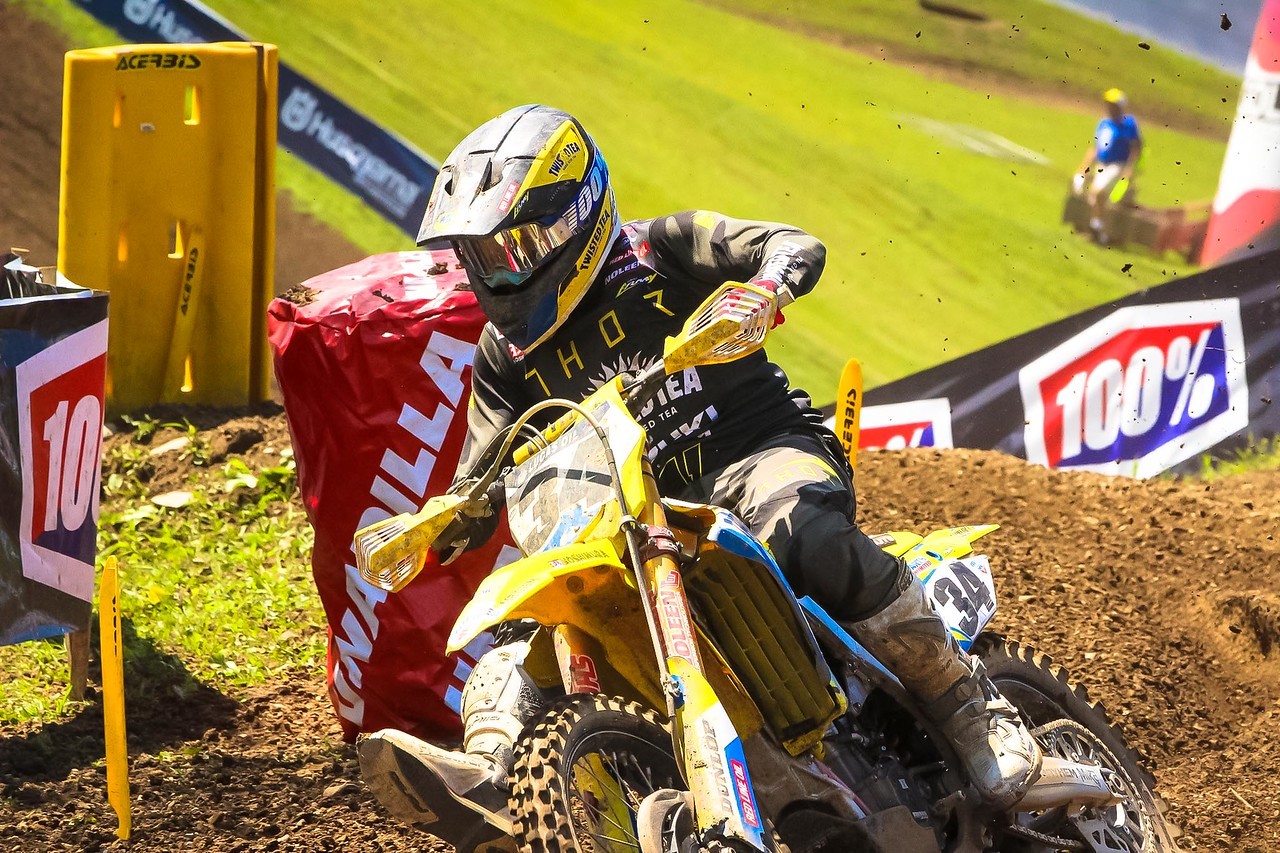 Max Anstie (34) used the performance of his RM-Z450 to earn an eighth-place overall finish at Unadilla.

Max Anstie's MXGP experience was on display on the rutted and challenging Unadilla track. Anstie used a strong start in Moto 1 to pass his way into the top ten just five minutes into the 30-minute plus two lap race. He pushed ahead to gain more positions for this best moto finish of 2021. In the second moto Anstie's charge started from inside the top fifteen as he methodically sliced past other racers. He reached into the top ten with just over two minutes left on the race clock and managed to make one more pass before the checkered flag flew. For his strong efforts "Mad Max" advanced one position in the championship points standings.

"It was a good day here in Unadilla; it's my first time here," said Max Anstie after the race. "We ended up eighth overall, so we're making progress. The team has done a great job in the last few weeks' break to make some positive steps with the bike set-up, and it definitely was nice to be in the race; I've got to get out of the gate [faster] this next weekend in Budds Creek and we'll be back at the sharp end with the guys. We've definitely made progress so I’m happy." 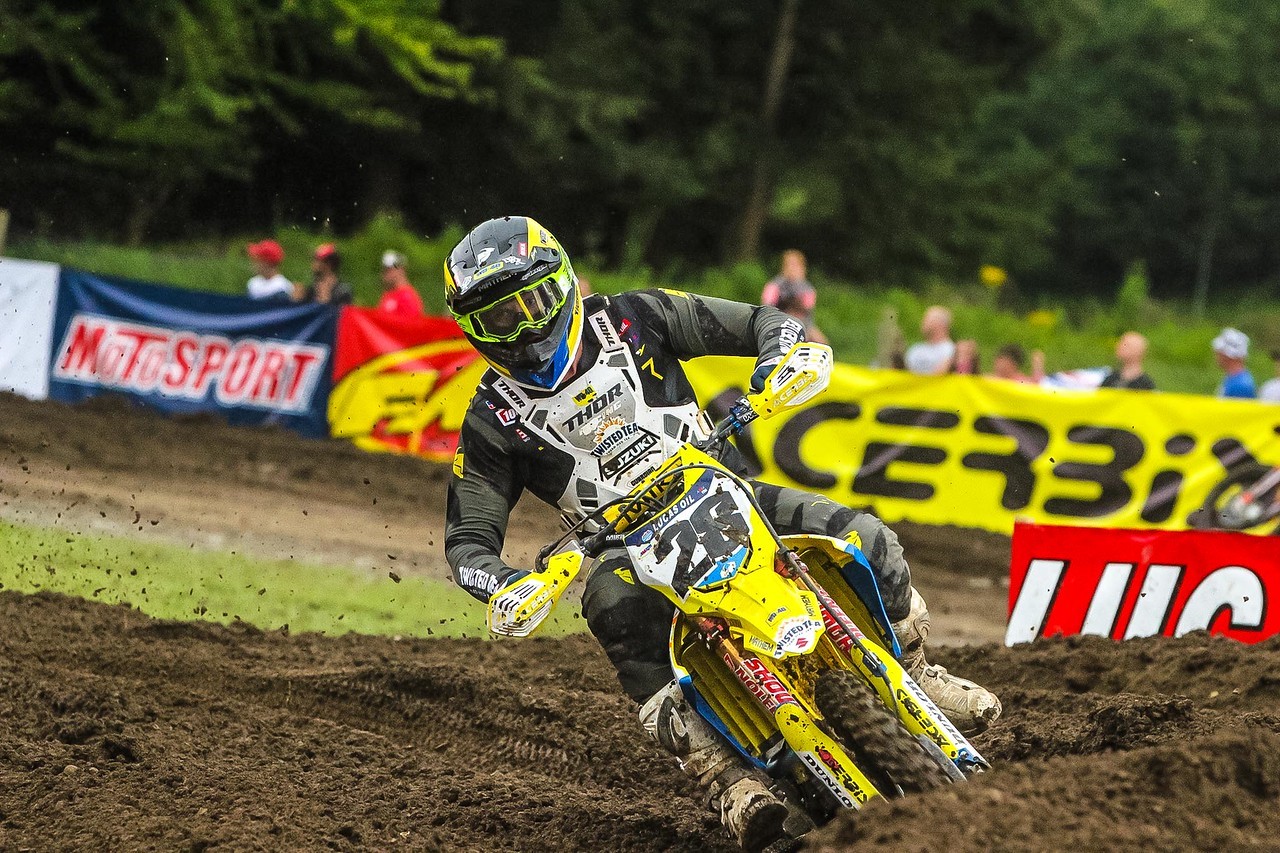 450-class rookie Brandon Hartranft continued to impress aboard his Twisted Tea/H.E.P. Motorsports/Suzuki RM-Z450. Hartranft battled through the heavy roost to put his Suzuki into the top ten in the first moto. Hartranft nearly repeated the feat in Moto 2, running inside the top ten when he ran into trouble; he still managed a strong overall finish when both moto's scores were combined.

"It was a pretty good day. We're getting better every race," expressed Hartranft. "Qualifying went pretty well, I was twelfth overall. In the first moto, I had a pretty good start; I tucked into the inside of the first turn and would've had an even better start if [another rider] hadn't crashed after the first turn. At the end I was battling for ninth and ended up with a strong tenth place finish in the moto. I'm stoked on my progression and I'll just keep working hard and we'll have good results."

"It was a good day at 'Dilla," reported Twisted Tea/H.E.P. Motorsports/Suzuki Team Manager Dustin Pipes. "I think the bike changes we made during the last few weeks have been good and it showed out on the track. Max was close to being in the top five in the first race and Brandon was in the top ten pretty handily, so I think it's a great indication of growth as we head to Budds Creek and towards the end of the season." 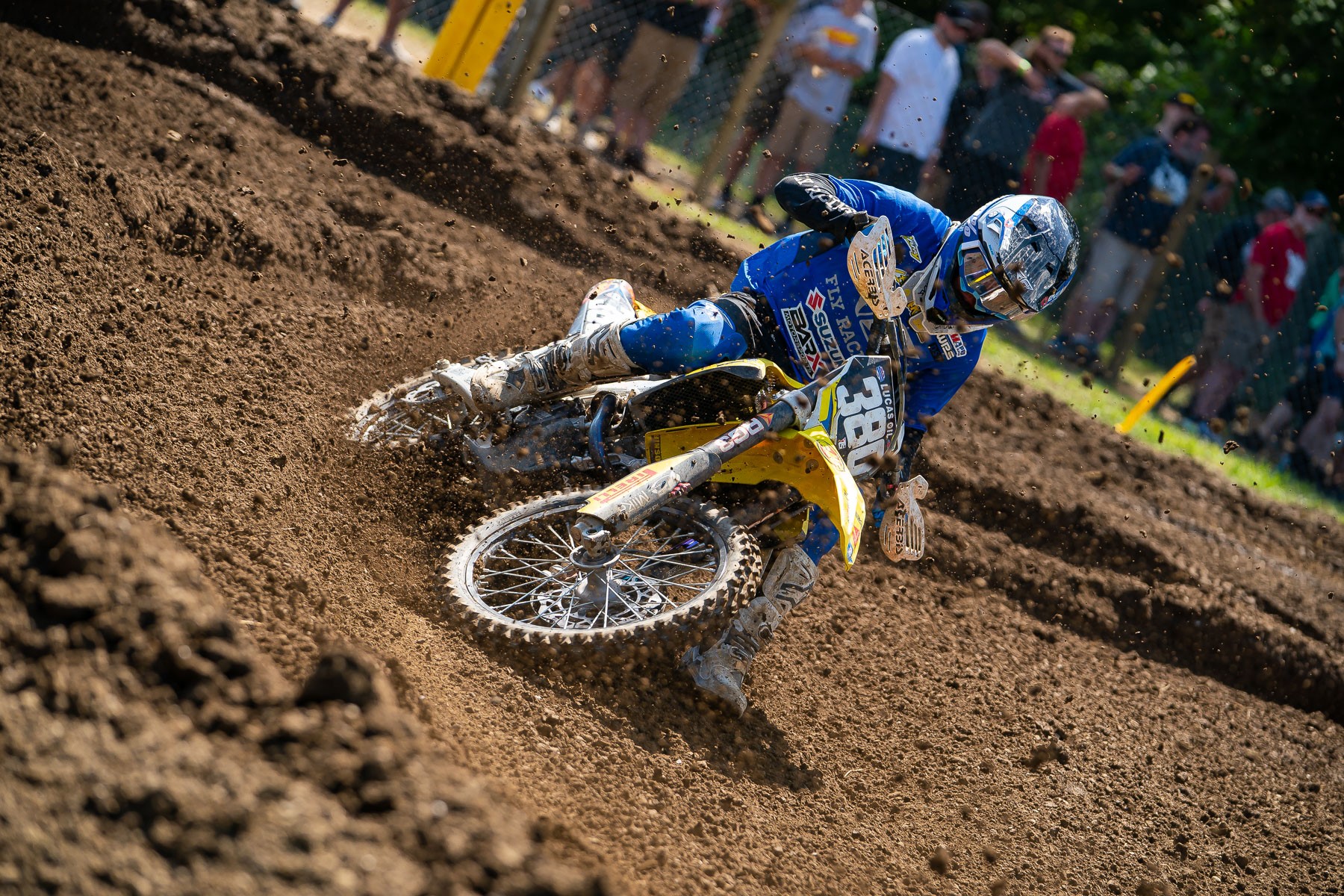 Coming off of two moto wins and two overall podiums at the Loretta Lynn's AMA Amateur National Motocross Championship the week prior, Preston Kilroy made a strong entry into the 2021 pro series. The young rider, with only two pro races to his credit in 2020, banged bars with the fastest riders in the world. Thanks to a strong start in Moto 2 and impressive endurance the young racer and his Suzuki RM-Z250 netted a top ten finish in the final moto of the day. Scoring good points in both motos dropped Kilroy directly into 26th position in the title points after only contesting a single round.

"Overall today was pretty good," said Preston Kilroy fresh off of his incredible ride. "Moto 1 started a little rough with a bad start off the gate, but I was able to squeeze on the inside of the first two turns and make a few moves. I rode a little tight midway through so I tried to take good lines and not make any mistakes. In the second moto I got off to a pretty good start and was up with all the fast guys. I was able to see the fast lines and I got some good laps in. About halfway through the moto I struggled a little bit to find my flow, but then started to use some lines that were working. I was able to put in some good laps and ended up tenth. I’m excited to keep learning and keep building each weekend and am relieved to have my first National of the year under my belt!" 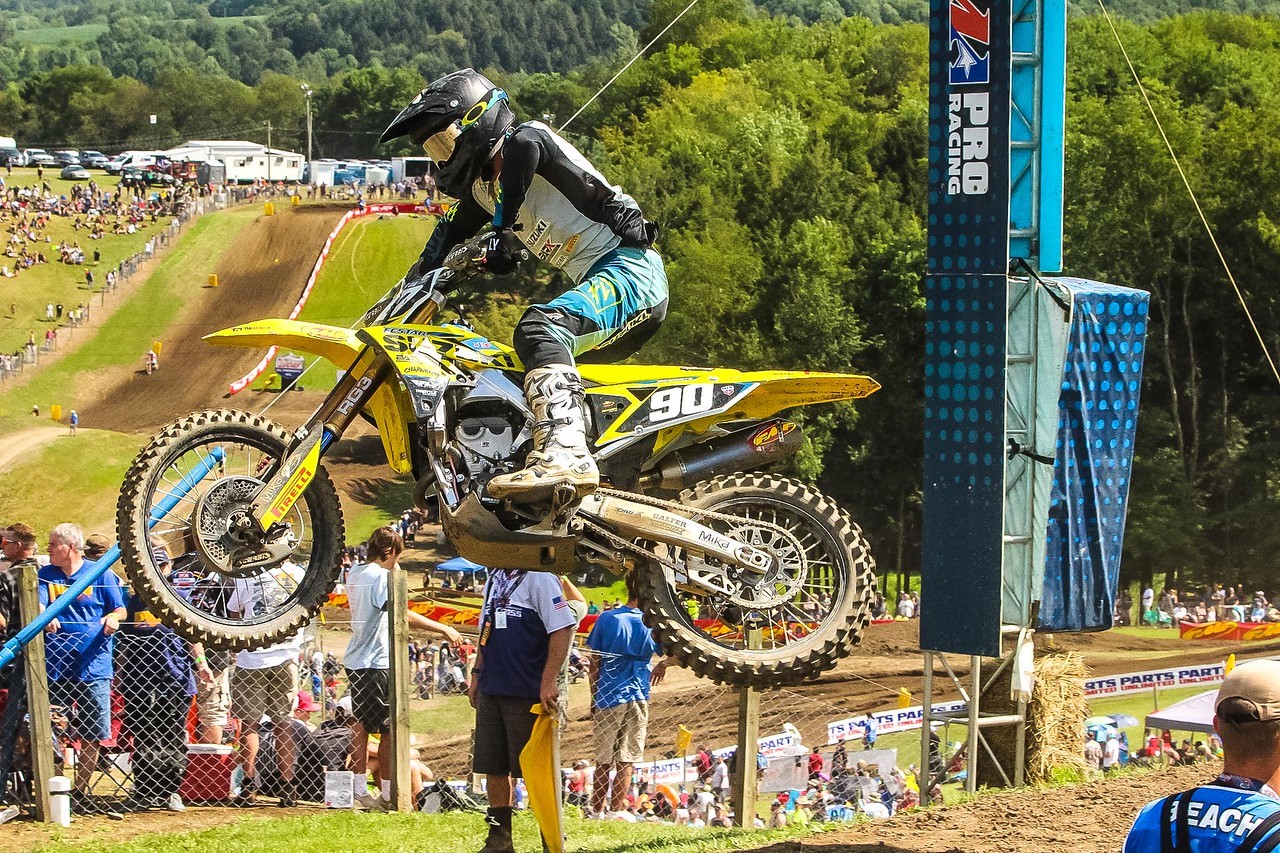 Dilan Schwartz (90) raced hard and showed the speed of his Suzuki RM-Z250 this weekend.

After a career-best moto and overall finish at the previous round, eyes were on the BarX/Chaparral/ECSTAR Suzuki RM-Z250 of Dilan Schwartz. The rookie racer had the speed, though a setback early in each moto prevented a repeat of his top ten finish. Schwartz likely passed more riders than any other racer at Unadilla and his talent and composure brought home two remarkable charge-through-the-pack rides.

"I don’t think I could’ve made Unadilla any harder for myself," admitted Schwartz. "I crashed on the first lap in both motos and had to come from dead last. But I’m happy with my riding and fitness to be able to end up with 15-12 moto scores, and I really enjoyed how technical the track was. Hopefully I can keep it on two wheels next weekend and get better results."

The 12-round series continues next weekend at Budds Creek in Mechanicsville, Maryland. The Suzuki racers, teams, and support crews are ready to put in more strong showings, deliver more great results, and continue moving up in the championship point standings.

For more information on the teams and their Suzuki race bikes, please visit SuzukiCycles.com/Racing and HEPMotorsports.com.