Brea, CA (August 16, 2021) - Suzuki Motor USA, LLC and Team Hammer were at it again at Pittsburgh International Race Complex, adding more wins, podiums, and pole positions to their season tally while taking another big step toward a pair of national championships. 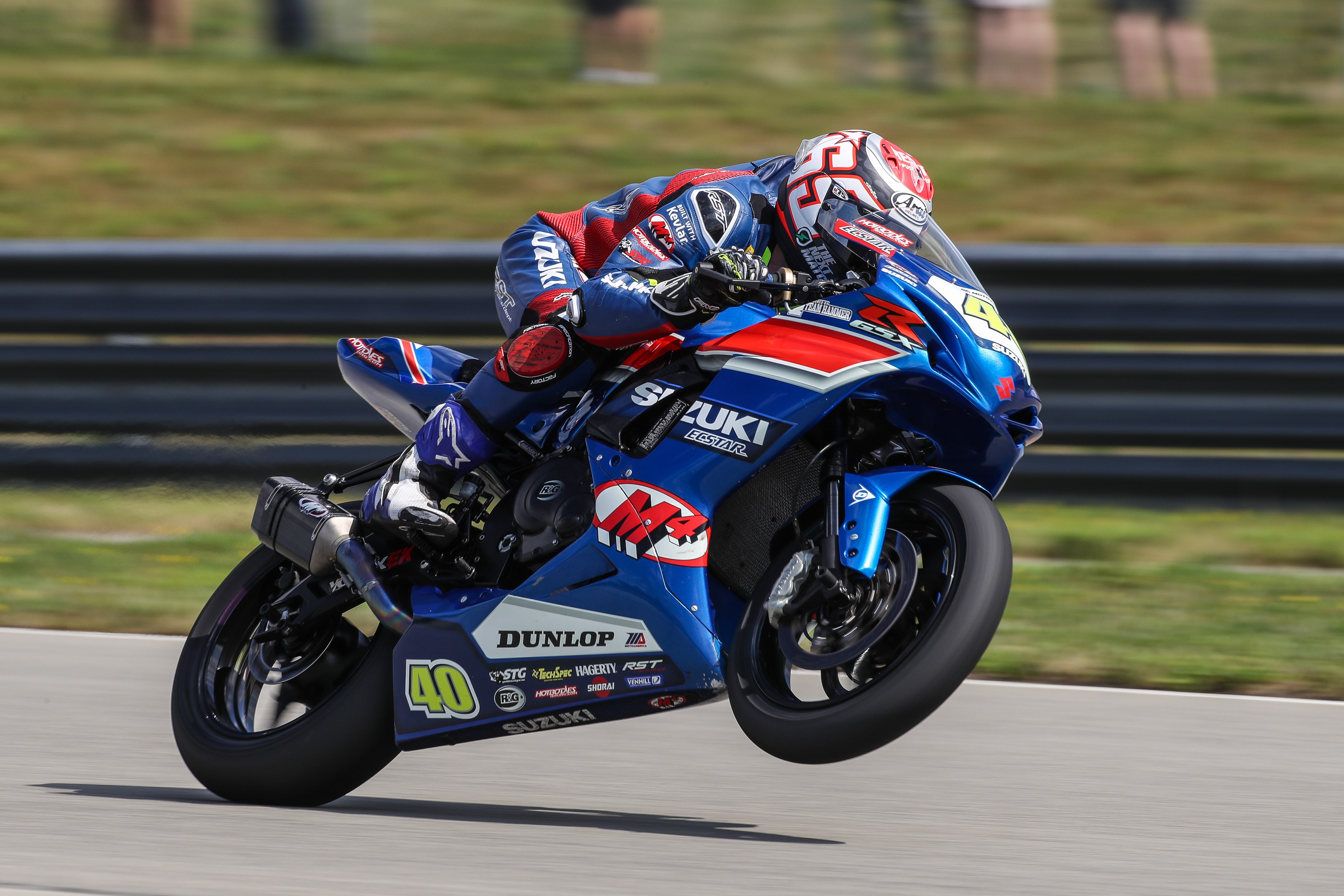 Sean Dylan Kelly (40) executed an impressive last-lap pass for the win on his Suzuki GSX-R600.

M4 ECSTAR Suzuki’s MotoAmerica Supersport ace Sean Dylan Kelly was the headliner as has become customary this season. The rising star saw his six-race win streak snapped following a hard-fought fight on Saturday only to come back even stronger a day later.

‘SDK’ pulled off a tactical master class in the rematch, executing a stunning last-lap maneuver aboard his agile GSX-R600 in Turn 11 to secure his tenth triumph of 2021.

Kelly said, “Man, the confidence came from the feeling I had in the bike today. It was absolutely amazing. Huge thank you to my whole M4 ECSTAR Suzuki crew … all my guys. I just felt so great with the bike. I feel I played it smarter today, too. Yesterday, I didn’t win and I wasn’t going to let it happen again. You can see I had a different game plan and it worked out to perfection."

“We did what we had to do. I’m very proud of the work. Today was an important step to the ultimate goal. We’re going to keep on fighting until we reach it.” 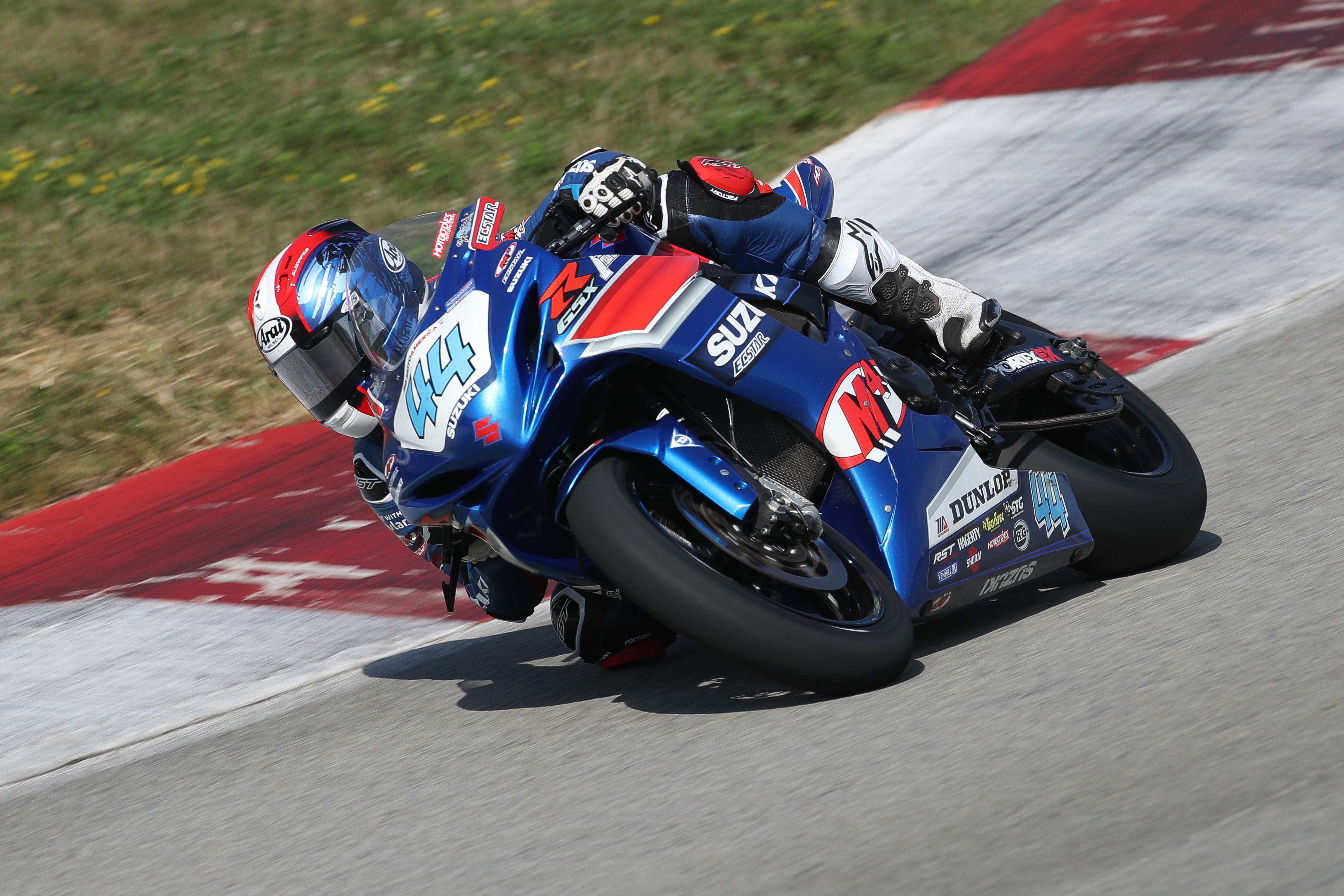 He said, “It’s still my first year, so finishing the year strong means just finishing every race. I’m not really putting a lot of pressure on myself. Obviously, getting podiums is nice, but wherever I finish, I’ve already reached many of my goals. I’m always trying to improve, but I’m very happy with how the year is going.” 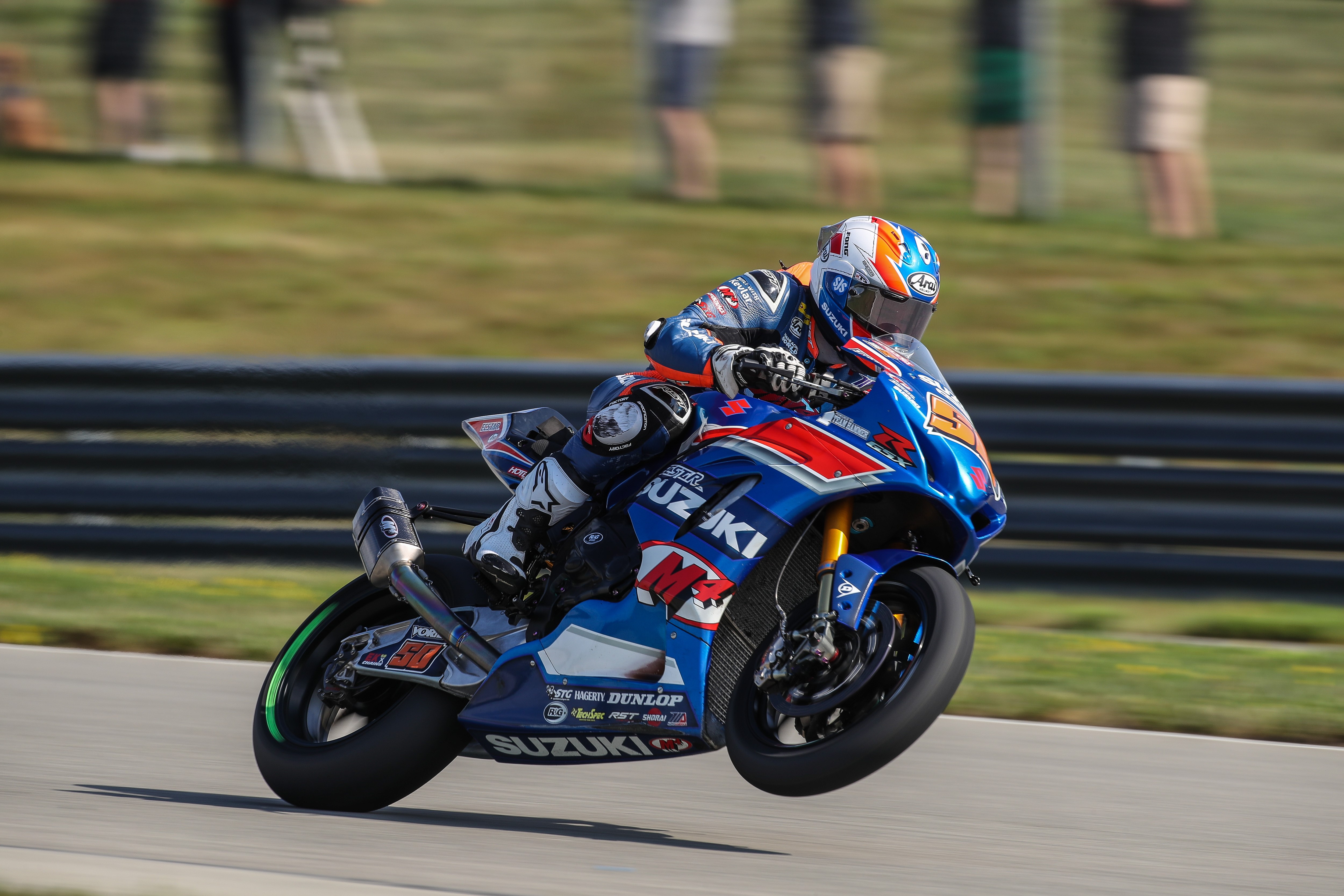 Bobby Fong (50) delivered a well-earned podium finish on his Suzuki GSX-R1000R on Sunday.

The Californian was robbed of an opportunity to demonstrate his full potential on Saturday due to a technical issue. Undeterred, he started the race from pitlane and ripped his way up through the field, overtaking nearly twenty riders en route to eighth.

He was forced to start from Row 3 on Sunday as a result, but continued his upward mobility, streaking up to third while pressuring second by the time he took the checkered flag aboard his GSX-R1000R.

Fong said, “It’s been a roller coaster of a year, but I’ve fought through worse challenges before. We just kept our head held high and kept charging. It was a good race. I’m happy to be back up and excited that we have the M4 ECSTAR Suzuki handling well.” 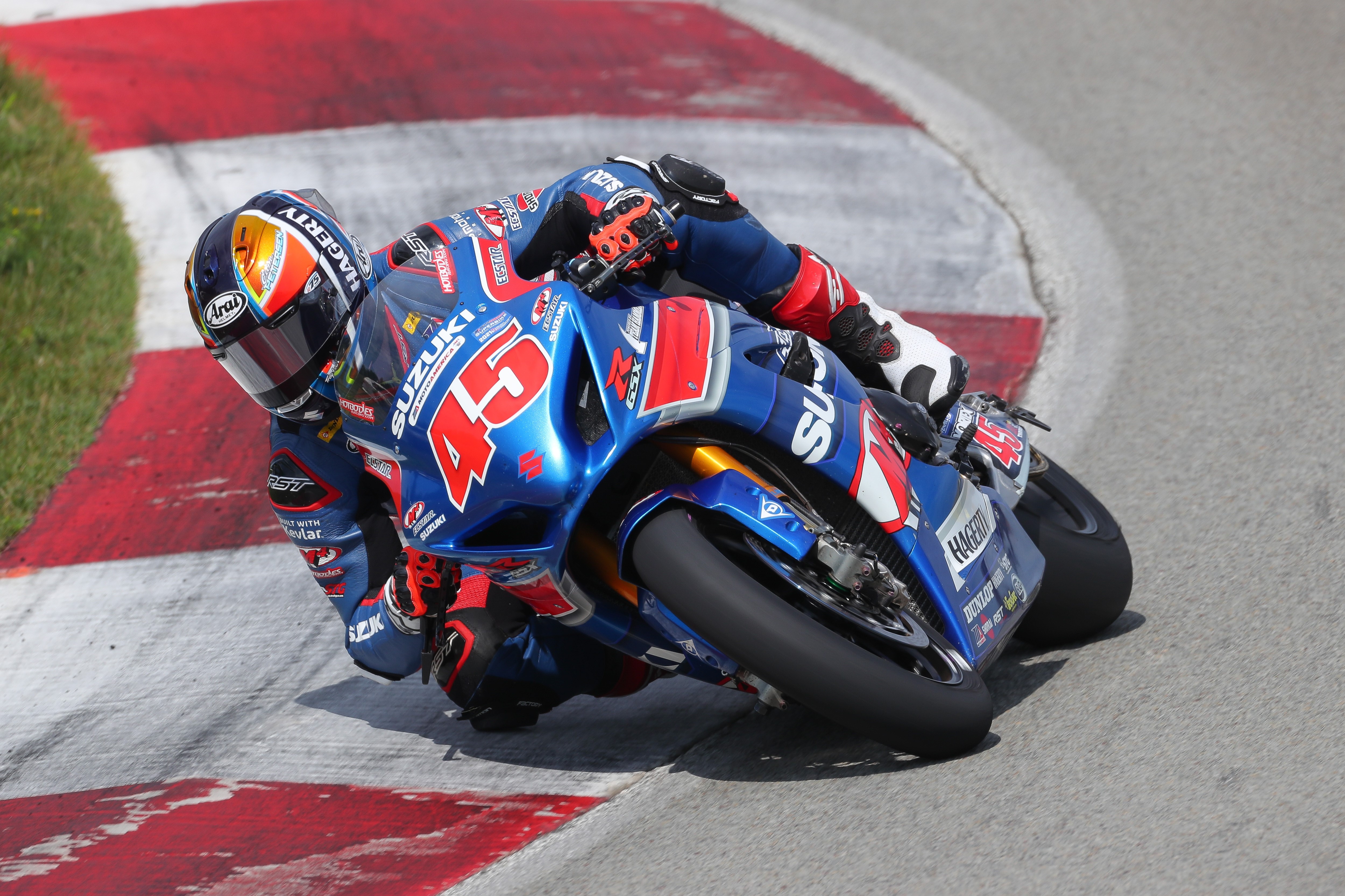 Cam Petersen (45) had another solid weekend with two top-ten finishes on his GSX-R1000R.

It was another steady weekend for second Superbike pilot Cameron Petersen. The South African collected fourth- and sixth-place results on the weekend.

Jake Lewis (85) increased his Championship points lead with another dominant win on his GSX-R1000R.

Lewis was also the top Superbike Cup finisher in both Superbike races in Pennsylvania.

After earning his fourth Stock 1000 win of 2021, Lewis said, “It was a perfect weekend. This race was pretty tough. I had pace on the guys all weekend, but they kept me honest in the race. Big thanks to the whole team. The Suzuki has been amazing.” 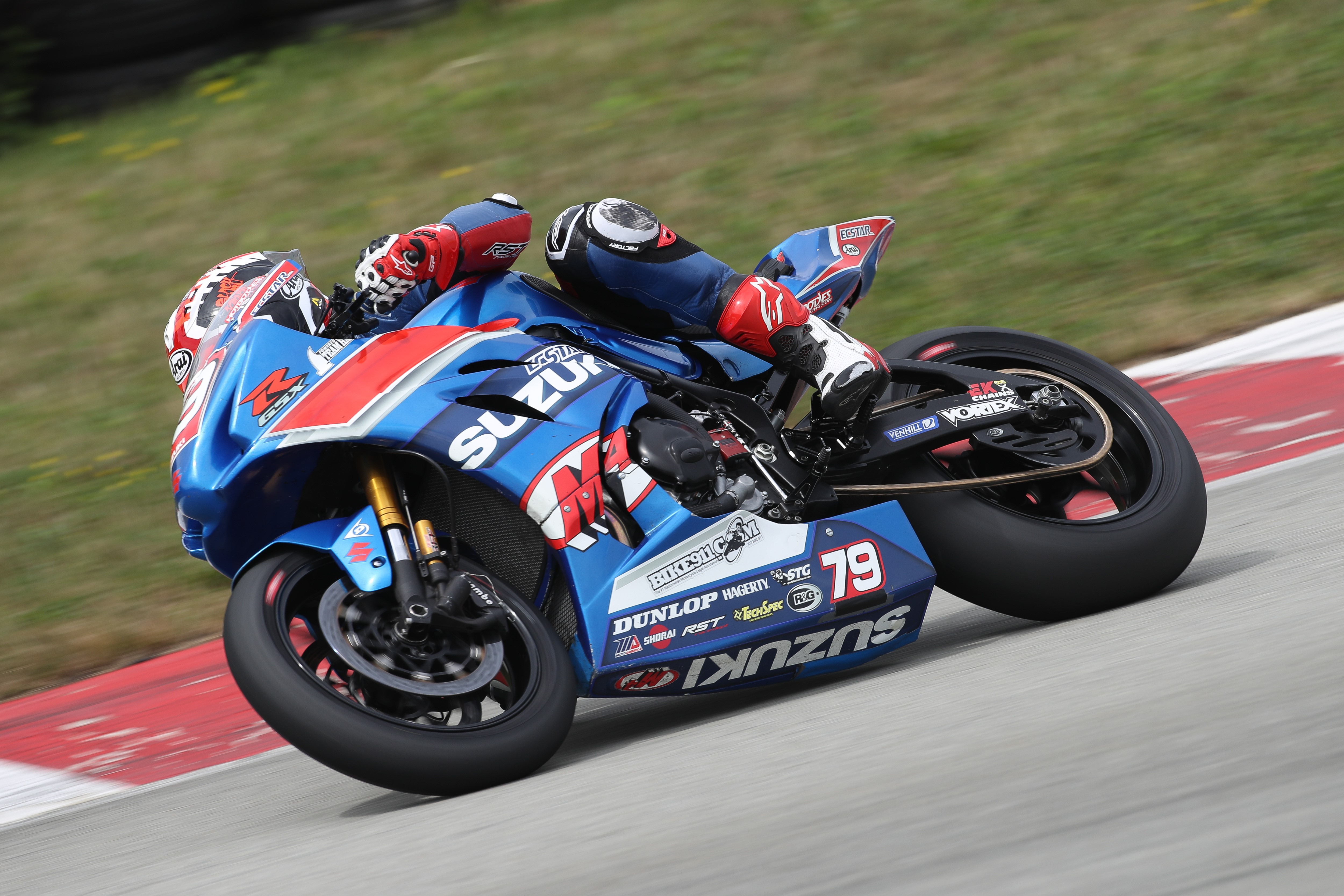 Wyatt Farris (79) had a tough weekend but will be back stronger in New Jersey.

Unfortunately, M4 ECSTAR Suzuki’s Wyatt Farris was unable to earn additional Stock 1000 results from his recent strong form. Farris crashed on the original race’s second lap and his GSX-R1000R subsequently went up in flames and burned on the track. That brought out the red flag while pushing the Stock 1000 restart to the end of the day. Farris was forced to watch from the fences after flashing top-five potential in the lead up to the race.

Team Hammer will contest the season’s penultimate round at New Jersey Motorsports Park on September 10-12, 2021.