Brea, CA (July 26, 2021) – Rookie Dilan Schwartz turned in his career-best pro finish with a top-ten placing in Washougal, Washington aboard his BarX/Chaparral/ECSTAR Suzuki RM-Z250. Max Anstie delivered another top-ten moto finish with a strong day on his Twisted Tea/H.E.P. Motorsports/Suzuki RM-Z450, and Anstie's teammate Brandon Hartranft put in fast back-to-back moto rides with his Twisted Tea/H.E.P. Motorsports/Suzuki RM-Z450 at the scenic track that marks round seven of the 2021 AMA Pro Motocross Series. 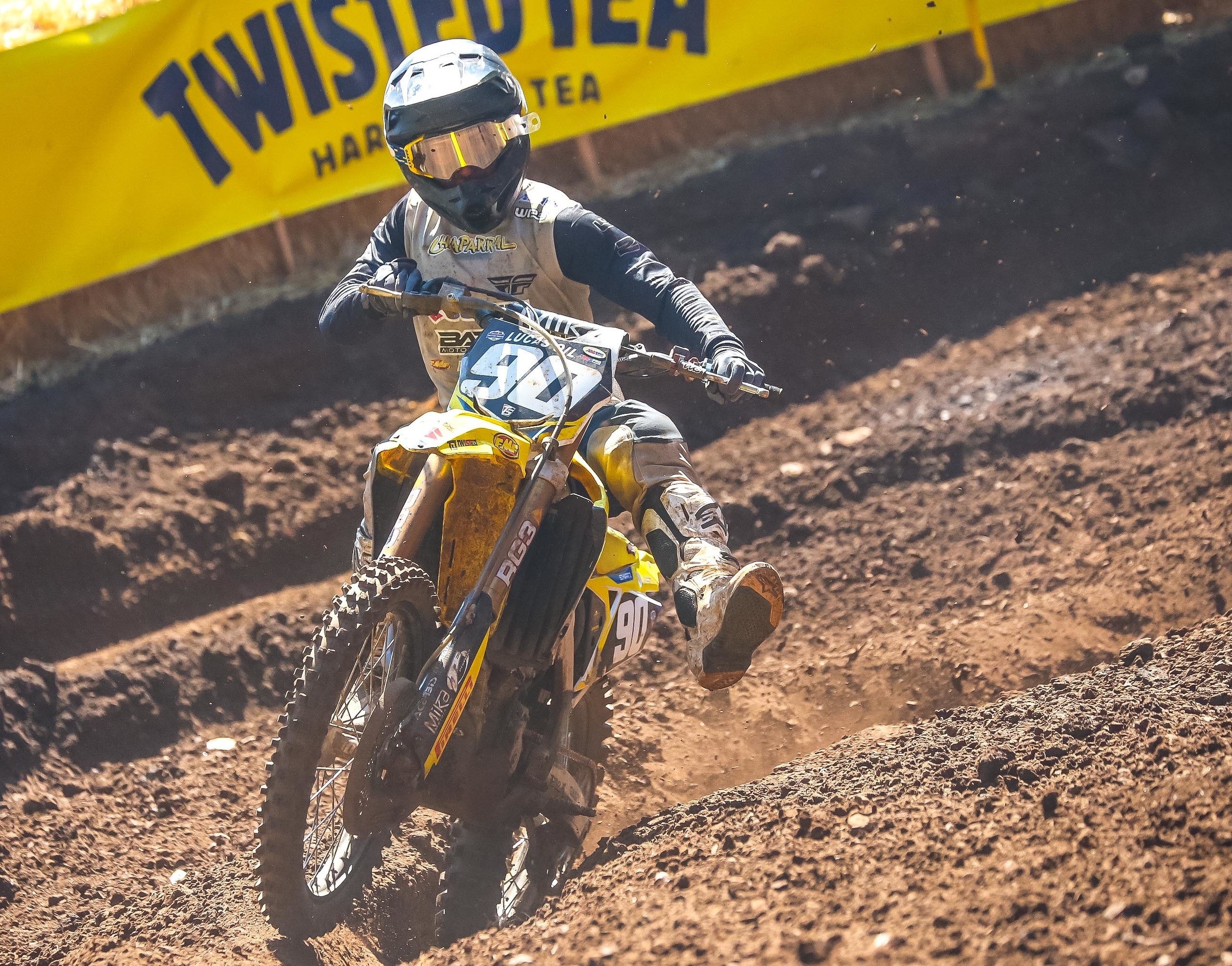 Dilan Schwartz (90) continued his impressive run of performances with an eighth-place finish at Washougal.

Dilan Schwartz pulled a great start in the first moto and ran inside the top ten for the first part of the race. A small mistake cost him several positions, he then charged ahead through the pack with lap times deep into the moto that demonstrated his top-ten pace. Schwartz followed that performance up with a near-holeshot in Moto 2. He held with the lead group throughout the 30-minute plus two lap race on the slick, challenging Pacific Northwest track. Schwartz and his RM-Z250 delivered a career-best finish in Moto 2, running in the top five and earning a sixth-place finish when the checkered flag flew. The rookie's 250cc machine was charging strong up and down the steep Washington hills bolstered by the protection of Suzuki's ECSTAR oil products. The eighth-place overall finish, a career-best for Schwartz, raised the young racer one position in the championship points standings.

"In the first moto I got off to a top-ten start, but unfortunately tipped over a few laps in," said Schwartz after the day's racing was completed. "It took me a little while to get up and I when I got going again, I was around twentieth or maybe a little worse. I was able to charge and come back to thirteenth. In the second moto, I almost pulled the holeshot, which was cool. From there I rode consistently in the top ten and ended up sixth. I'm pumped with this result going into the break and I'm looking forward to the next race!" 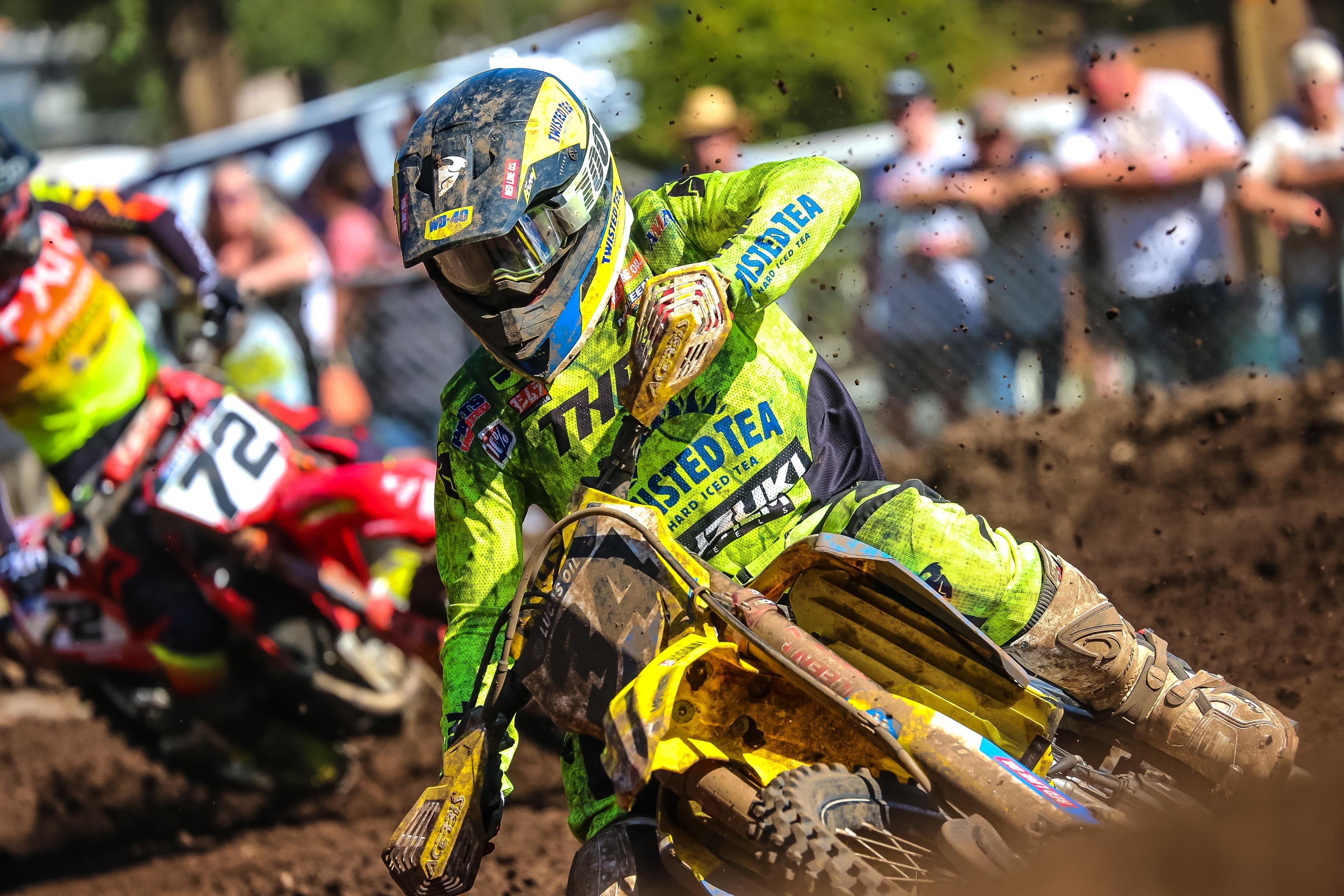 Max Anstie (34) had a solid weekend of racing at Washougal going 9-12 for 11th overall.

Max Anstie also put in impressive moto rides, particularly for his first visit since 2010 to the deceptively slick track after years competing on the MXGP circuit. Anstie quickly got reacquainted with the fast line around Washougal to put in two consistent rides. The Englishman matched his best moto and best overall finish from the round before, showing the Twisted Tea/H.E.P. Motorsports/Suzuki team effort is improving as the season enters into its second half.

“Progress was made at Washougal," was how Anstie summed up round seven. "I rode well in Moto 1 and came out with a ninth-place finish. In Moto 2 I fought hard and ended up twelfth. We will keep pushing and we'll get some testing done in the break to be ready to come back stronger at Unadilla.” 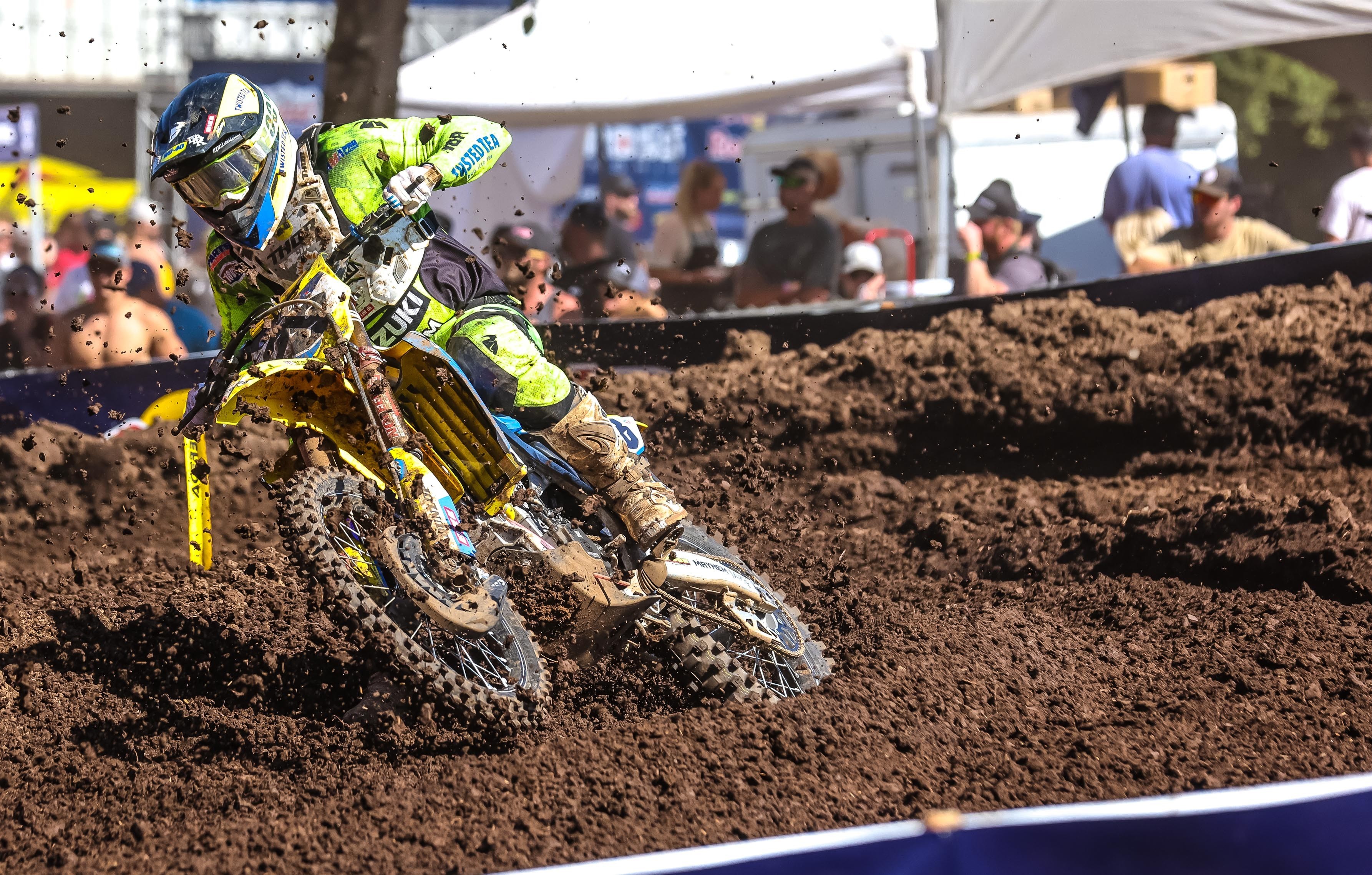 450-class rookie Brandon Hartranft overcame some challenging track positions to charge past other riders, particularly in the opening laps of Moto 1 where, after a tough start, he quickly fought back into the points. He turned strong lap times into good finishes to continue progressing in the class as the schedule heads into a three-week break.

"It was a solid day. Qualifying went pretty well; I was riding really well today," was Hartranft's assessment. "In the first moto I came from about thirtieth spot all the way up to thirteenth; that was a really strong ride. In Moto 2 I was actually catching the top ten, but just hit a wall and unfortunately faded back to fifteenth. The track was pretty sweet today. I can't thank Suzuki enough for their help this year. We'll keep fighting. There are five rounds to go and I'm going to bring the heat."

"It was another step in the right direction at Washougal," reported Twisted Tea/H.E.P. Motorsports/Suzuki Team Manager Dustin Pipes. "The team made strides in the week leading up to the race with changes to the drivetrain and it showed with some great starts. The team has a couple more testing days scheduled in the off weeks where the plan is to make more improvements. Brandon and Max are definitely on an upswing, we just need each rider to put two complete motos together to get the results they deserve."

The AMA Pro Motocross series takes two weekends off. The riders do battle again at round eight in Unadilla, New York. Schwartz will continue to impress in his first pro year, Hartranft is bettering more experienced riders each weekend, and Anstie will employ his MXGP experience to the European-style track in New York state.