Morning rains fell on the commemorative track that was a re-creation of the 2007 Orlando Supercross track. The 2021 event was the first return to Orlando since that '07 event, which marked the final supercross race of retiring five-time champion Ricky Carmichael and his thrilling final supercross performance fourteen years prior on his Factory Suzuki RM-Z450. 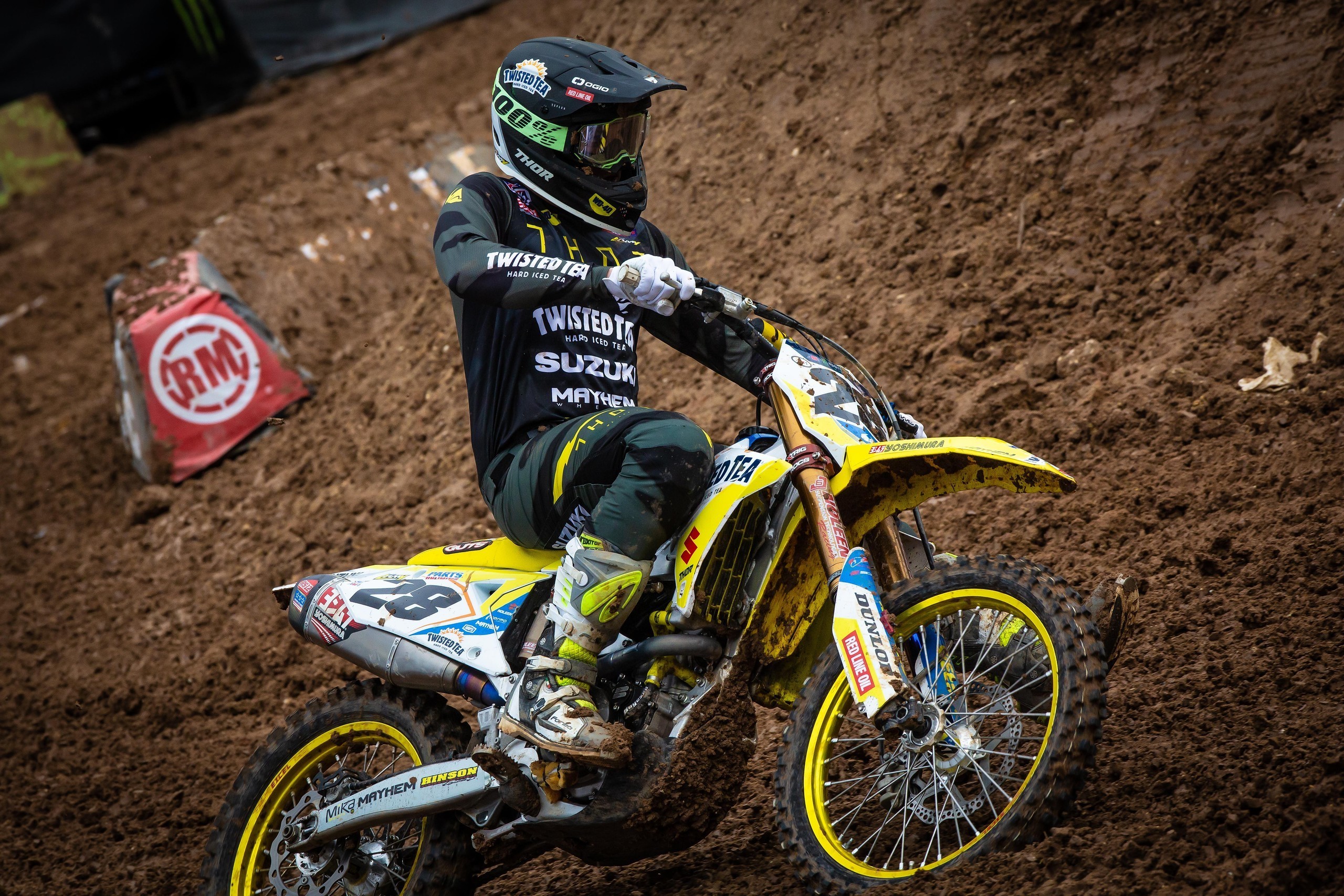 At the 2021 event, Brandon Hartranft got shuffled to the back of the pack in his heat race despite his run of great starts this season. He advanced a position each lap for the first two laps, but a transfer position remained out of reach. Hartranft emerged from the first corner of the LCQ in a better position; he battled one spot outside of qualifying for most of the race that gated factory and former factory riders.

"Not the best day. I'm struggling with some things right now," confided Hartranft. "But I’ll be better for the next weekend. The Orlando 1 track was hardpack compared to the last few weekends. There were not as many ruts so everyone was closer in speed. My starts are good, I just need to put the pieces of the puzzle together and I’ll be right where I need to be." 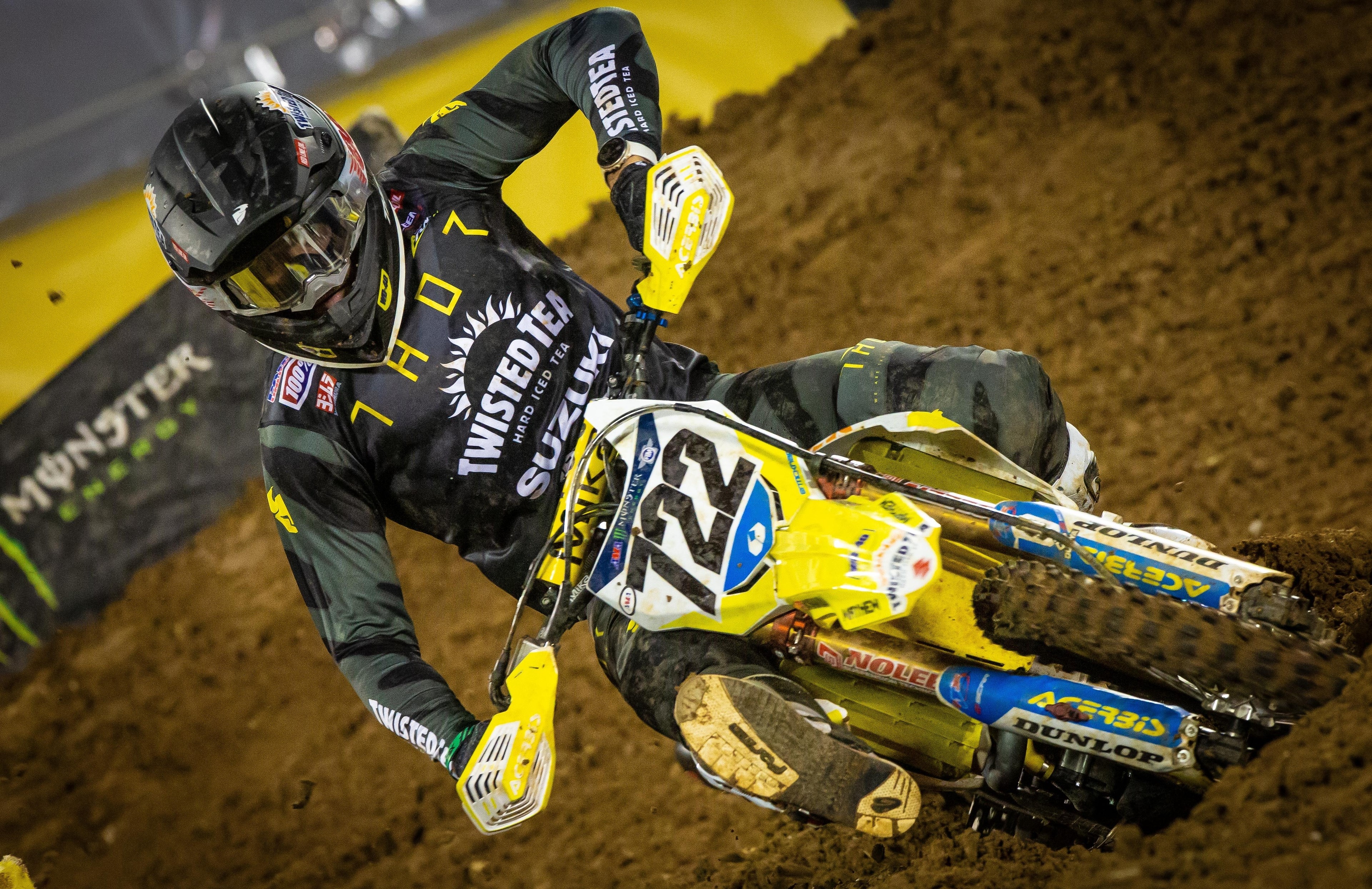 Adam Enticknap had a rough night in Orlando following two outstanding rides at the two final events in Indianapolis. His night was cut short due to a racing incident early in the LCQ which dashed his chances of showing the great speed he's been developing at the past rounds.

"As the day went on I felt better and better," reported Enticknap after the racing. "I lined up for the LCQ and felt great. I got a good start, I had gotten the track figured out, I was waiting to put a charge in and get those spots that I needed to make the main event when another rider and I clashed and drove me off the side of a jump. I ejected off the front of my bike over a double and I crashed pretty hard. I was pretty upset about it, but sometimes those things happen in racing, especially when you don't get the holeshot. So the plan is to get some practice in this week, work on some more starts, not that they're that bad, but I would like to get a holeshot and get out front and be out away from those issues. I'm looking forward to Orlando 2 and I'm glad my bike's working really well."

"The team is working together well right now. All the team staff are gelling and working efficiently, which has made for a cohesive working environment," reported Team Manager Dustin Pipes. "On the track, the results haven’t been what we expect. Brandon has been dealing with a lingering issue that is affecting his riding. As a team, we are staying in Florida to try and remedy it to come back swinging for round eight. Adam is riding better, unfortunately he came together with another rider while racing himself into a transfer position."

The second Orlando event on Saturday, February 20th will kick-off the 250 West championship as the 250 East racers go into a 10-week break from their racing. BarX/Chaparral/ECSTAR Suzuki racers Sean Cantrell and Dilan Schwartz and their Suzuki RM-Z250 race bikes are ready to take on the nine-round series that culminates in Salt Lake City with the lone 250 East/West Showdown of 2021.

You are now leaving Suzuki Motor of America, Inc.'s Website, and entering an independent dealer site.

Suzuki Motor of America, Inc. is not responsible for the content presented by any independent Suzuki dealer, including advertising claims, special offers, illustrations, names or endorsements.